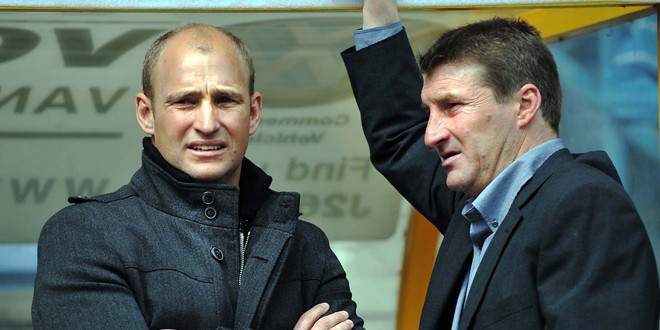 The Australian said he was pleased with the way his side killed off the Red Devils last night, but knows there is still room for improvement.

“We’re happy with the result,” he said.

“The first thing the forwards said when they came in at the end of the game was ‘Browny don’t look at the score and think that was easy’. It was a tough game.

“At 12-0 it looked like it was going to plan, but Salford dug in and we had to work hard to get the score we did.

“We had some really nice tries but in the first half we did all the hard work and just needed to throw the pass for one or two.

“We are a work in progress, the boys are working hard for each other but to catch up with other teams we need to keep our feet on the ground, work hard and improve.

“Our defence seems to be improving. It’s not perfect but it’s really pleasing when things go wrong the guys cover each other’s backsides.”

With ball in hand, Brown is a lot more satisfied.

“We certainly aren’t boring, we don’t play five up and a kick. That’s the great thing about the English game – the ball gets used a lot.

“In the NRL they are sometimes scared to play footy, it’s about defence and completion rates. St Helens have a style, Wigan and Leeds too – it’s a good side to the game over here.

“We have plenty of sore boys in the dressing rooms but it looks like everyone has come through ok.

“Gary Wheeler missed the game with a dead leg. He took a knock in training yesterday. It’s only a short term thing I’m sure.”