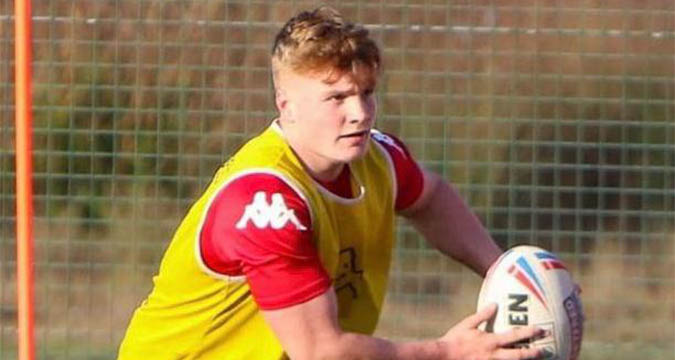 Salford Red Devils have agreed a one-year first-team contract with their 18-year-old hooker Connor Aspey, following his two-month trial that was funded by the club’s Supporters’ Trust.

And Aspey believes the determination he has shown during that period is what secured the deal.

“I just had the mentality to do my best in everything that I did,” he said.

“I couldn’t be slacking on anything, even if it’s just jogging in or getting onside. I made sure I gave everything one hundred percent.”

“It’s been good but tough, especially with Gaz (Gareth) coming in as the new conditioner. It’s quite different from what we’ve been used to.

“Rich really cracks down on your skill, so he’s getting all of us better with the ball.”

The hooker also spoke about how training with the more experienced players has helped him improve his game.

Aspey said: “It’s good having them there, especially if you need to ask something or you need tipping up on something they’ll always help.

“Especially Andy Ackers as well, he’s obviously a hooker like myself and he’s always giving me little tips and helping me out along the way.”

With Paul Rowley appointed as the club’s first head of rugby development, talent & pathways recently, the focus is on seeing more young, local players break into the first team.

Coming through the Academy ran by Salford Red Devils Foundation before stepping into the reserves grade in 2020, Aspey is an example of how Salford are investing in youth following the signing of his contract.

“I think it’s important to get that youth up and going, a lot of young lads go missing,” said Aspey.

“I just think the youngsters like myself need to work our hardest, do the best we can and show what we’ve got when we play.”

The hooker made his debut for Salford against Hull Kingston Rovers in Super League last season and is hoping to build on that in 2021.

Aspey added: “I just want to get some appearances, especially in Super League this year.

“I want to get some games under my belt and show people what I can do.”