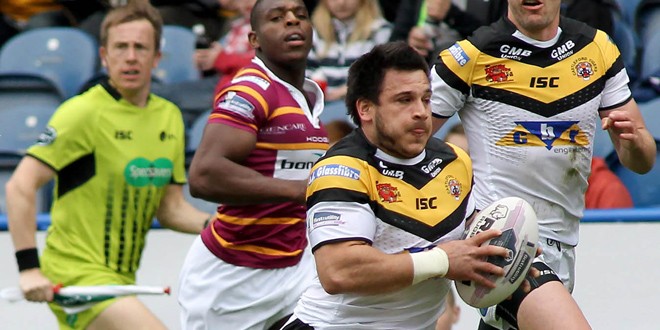 Carney’s future was up in the air with a number of clubs believed to be keen on the services of Carney, but League Express revealed on Monday that the Australian was destined for the AJ Bell Stadium:

SALFORD RED DEVILS are closing in on a deal to bring Justin Carney to the AJ Bell Stadium in 2016.

Carney is unwanted by current club Castleford after being suspended earlier this year, although that suspension was officially lifted by the club soon after.

However, with the Tigers signing Joel Monaghan last week, they are in a position to let him look for a new club, with Salford now in pole position to sign him.

It had been alleged that Hull FC’s players vetoed a club move for Carney, but it is understood a deal had not reached that far down the line, and the Black and Whites had already decided against signing the winger.

It is now down to Salford and Salford alone for Carney’s signature, with the club hopeful they can get a deal over the line in the coming days.

It would bring a tumultuous end to Carney’s Castleford career to a close, after establishing himself as one of Super League’s most destructive players during his time at the Mend-A-Hose Jungle.

He became a firm favourite with Cas fans and even said earlier this year he’d put his hand up for England, but he now faces a new challenge to rebuild his career at the Red Devils.

Sources at Cas told League Express last week that rumours a deal had been agreed were premature, but it is now looking like a matter of when, not if, Carney is unveiled as a Salford player and the latest player to join them in 2016.

The confirmation of Carney’s arrival would also be a catalyst for Ben Jones-Bishop to find a new club next year, too.

League Express reported last month how Jones-Bishop was in talks with other Super League clubs and had even attracted interest from rugby union, and Salford are still prepared to let him go, with Carney likely to act as his direct replacement.

Koukash tweeted: “Delighted to announce the signing of Justin Carney.” to confirm the move.