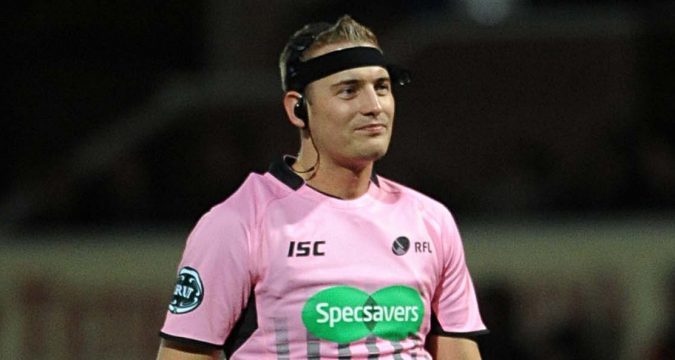 Player, clubs and colleagues were quick to take to social media and offer their condolences as the sad news became apparent late on Sunday evening.

The circumstances remain unclear surround the passing of Leatherbarrow, who leaves behind a young daughter.

The thoughts of everybody at the club go out to the family and friends of young referee Chris Leatherbarrow. Tragic news.

Leatherbarrow had worked his way up through the amateur game before being appointed a Super League referee.

My deepest sympathies are with the family of Chris leatherbarrow Such awful news RIP Chris — Kallum Watkins (@KallumWatkins) November 2, 2015

After the news circulated online on Sunday night, the RFL confirmed his passing in a short statement. RFL Chief Executive Nigel Wood, said: “We are all truly shocked and saddened by the news of Chris Leatherbarrow’s untimely death. “This is a dreadful tragedy and our thoughts and prayers are with Chris’ family, friends and colleagues at this terrible time.”

Amongst those who showed their support was Coronation Street actor Antony Cotton, who tweeted: “Shocked and saddened to hear the news about Chris Leatherbarrow.”

Shocked and saddened to hear the news about Chris Leatherbarrow. Any of you lads struggling out there please don’t suffer alone @theCALMzone

The news originally surfaced on social media, and what followed was a catalogue of tributes to the referee, who hailed from St Helens. In 2013 he was named Championship referee of the year and went on to officiate a number of Super League games. Fellow referee Richard Silverwood was amongst those who paid their respects online, adding a picture from a trip away they shared together in Lanzarote.

Leatherbarrow was also hailed by a number of players.

So gutted to hear about Chris Leatherbarrow, a lovely guy who had genuine personality. RIP — jon wilkin (@JonWilkin2012) November 2, 2015