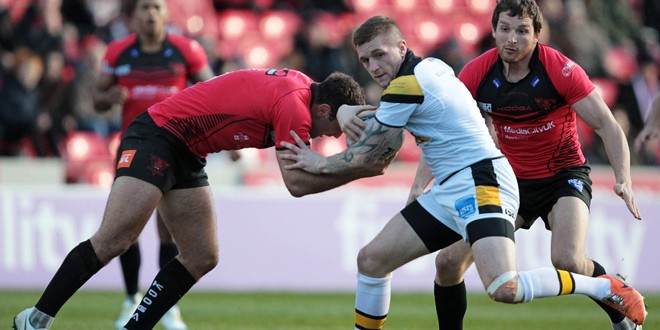 As a lifelong Salford supporter I have always wanted to see my club grabbing the headlines and bathe in the media spotlight. The Salford Red Devils may not be so much a dominant force on the field of play as we currently sit 11th in the First Utility Super League, but off the field we appear to be in a league of our own when it comes to column inches and headlines thanks to our owner and one man media machine, Dr Marwan Koukash.

Rarely has a Rugby League chairman caused so much hysteria or riled opposition supporters quite like Marwan. Week in week out we are granted the pleasure of the Palestinian millionaire’s thoughts via his Twitter page.

Gone are the days when we had to wait for Sunday and the match day programme to read what our then much respected ex-chairman John Wilkinson thought about yet another defeat. Thanks to Koukash’s love of social networking, everything that happens at the Red Devils these days is thrashed out in a 140-character tweet. So it was with a notification alert from @DrmarwanK (that isn’t a typo) that I read Marc Sneyd had submitted a transfer request.

Today, a transfer request from Marc Sneyd was received and we turned it down immediately. Can’t force players to play for our club, and they won’t force us to release them from their contract. Agents should not dictate to clubs.

This wasn’t a complete surprise considering Salford had announced 24 hours earlier that we had indeed captured the signature of current Newcastle Knight and former Hull KR scrum half Michael Dobson on a four-year deal from 2015.

Prior to this announcement, Salford supporters had been contemplating a pivot structure of Rangi Chase and Sneyd with Theo Fages at hooker. Even more so after CEO Martin Vickers announced on BBC Radio Manchester last week that both he and Koukash had met with Sneyd and it was a certainty that Sneyd would be a valued member of the Devils squad under coach Iestyn Harris next season.

The news that Sneyd is ready to sever ties with the club he joined on a scholarship as a fourteen-year-old back in 2007 has divided opinion: should he be allowed to leave, so that his career can continue to flourish as it has under Daryl Powell at Castleford or should Koukash cash in on a player who is legally contracted to Salford for a further 18 months.

The loan deal that saw Sneyd join Castleford was part of a large package that enabled Koukash to snare his prized asset in former Tiger and Man of Steel, Rangi Chase.

The capture of Chase and the now departed Tim Smith came merely months after Sneyd had penned a contract extension in May 2013. At the time he said, “I’m really pleased to have signed this extended deal, I have been at Salford a long time now and I want to be here while all this exciting stuff is going on. I want to be here when this team is hopefully reaching the play-offs every year and winning trophies. It’s going to be a very exciting couple of years at Salford.”

To be fair to Sneyd, when he made that statement Salford were under the tutelage of Brian Noble and he was in a squad that for the best part of 2013 struggled for consistency and finished bottom of the table.

However, since moving on loan to Castleford, Sneyd has become the most talked about player at the Tigers since Danny Orr made his debut. His partnership with Liam Finn has steered Cas to a Challenge Cup semi-final and they currently sit in fourth place in the Super League table with 11 wins from 16 games played. He is in the form of his life, and as much as it pains me to say it as a Salford supporter, he looks happy and settled at Castleford.

Since declining Sneyd’s transfer request, Marwan Koukash has expressed his disappointment with the Oldham born star and his agent Ian Blease.

Blease may be a stranger to Koukash, but not to the Salford faithful who will remember him fondly as the stalwart who not only captained the club during the late 80’s and early 90’s but also gave over 10 years’ service to the Red Devils.

Koukash also revealed that Blease, who is a director at Cheshire based Signature Sports Management, had approached Wigan to see if they would be interested in signing his protégé. This offer was declined by Warriors chairman Ian Lenagan but as far as Blease is concerned Sneyd has proven his value and should be the ‘number one choice at 6 or 7’, adding that ‘anyone who has watched him throughout his career will have seen his outstanding progress and his kicking game; he is just oozing with talent’.

Shortly after Koukash announced the transfer request via twitter the club duly released an official statement, which read:

Salford Red Devils have confirmed they have received, and subsequently rejected, a written transfer request from halfback Marc Sneyd.
We have made very clear to Marc that our intention was for him to play out the remainder of his contract at the AJ Bell Stadium as he remains an integral part of our plans moving forward. The club has no intentions of changing its position and we all need to move past this and look forward to the exciting squad we are assembling for next season and beyond.

With the recent public relations between Salford and Castleford resembling a ‘Game Of Thrones’ storyline and Salford heading to the Mend-A-Hose Jungle on the 28th June for a Super League Round 18 clash, I can guarantee this is one drama you won’t want to miss out on.