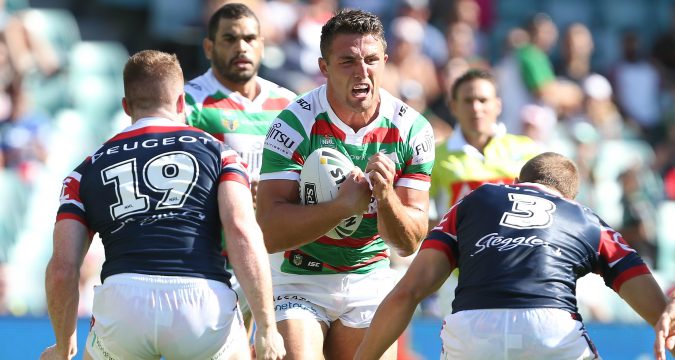 Sam Burgess gave a powerful performance as the South Sydney Rabbitohs proved to be far too strong for the Canberra Raiders today at the Central Coast Stadium, winning 42-22, although the English Test star could face another suspension for a high hit on Raiders’ halfback Aidan Sezer in the 59th minute of the game.

Burgess had completed a two-week suspension to come back into the side, but his indiscretion saw him placed on report, while his brother George was also placed on report for a high shot on Luke Bateman on 71 minutes.

In an entertaining clash, which was a home game for the Rabbitohs that had been moved to the Central Coast, the highlight was an interception try by Rabbitohs skipper Greg Inglis that saw him race 80 metres to touch down.

Souths scored three tries in the first 15 minutes before the Raiders were able to reply. They came back into the game, but when Jarrod Croker was sinbinned early in the second half for a professional foul the Rabbitohs scored two more quick tries to secure the verdict.