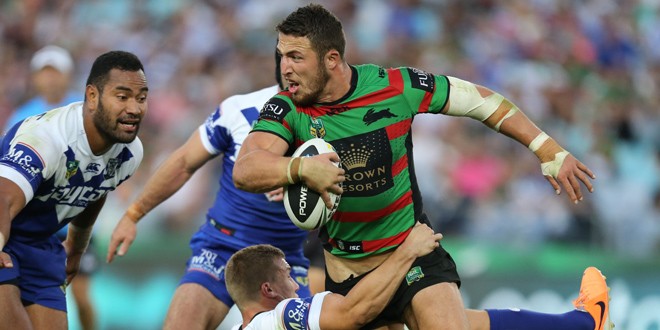 Departing South Sydney Rabbitohs forward Sam Burgess confirmed after the NRL Grand Final that he “played on adrenaline” following a horrific facial injury in the first tackle of the contest.

Burgess collided with England teammate James Graham in the opening tackle, suffering a possible fractured cheekbone. Burgess – when talking to Brad Fittler following the game – that he had indeed suffered the injury, but paid tribute to his teammates for getting him through – as well as delivering a memorable farewell speech to Rugby League.

“It feels like I’ve cracked by eyebone in the first tackle,” Burgess said. “I played on adrenaline, my teammates helped me through it. I’m pretty sure I’m going to be sore tomorrow, but I’d do it all over again.

“It’s a crazy feeling, how good is this. What a year; it’s been a fantastic 12 months. I want to congratulate the Bulldogs, they’re a champion team.

“I want to send my love to Isaac Luke; I love my family, but most of all, we did it for you, the fans. It’s been a long time, let’s enjoy it.

“It’s a feeling you can’t replicate. Russell, good on you. What a man. I just want to thank everyone.”