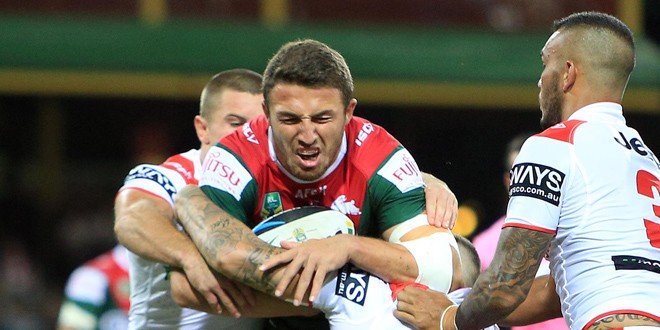 MARTYN SADLER, the editor of League Express, admits that he has mixed feelings about the return of Sam Burgess to South Sydney.

So now the storm is dying down, and Sam Burgess has arrived back in Sydney to play for South Sydney next season, which was perhaps what we all expected from the moment England bombed out of the recent World Cup.

And I have mixed feelings about Sam’s return to Australia.

I would have liked to see him returning to Super League for at least one season, whether with Leeds or with any other club.

Whereas South Sydney will, I assume, have to make some major adjustments to their wage structure next season in order to fit Sam into their salary cap, it would have been much easier for a Super League club because of the new marquee player rule that comes into operation next season, when only the first £175,000 of a player’s salary will count on the cap.

Sam cited the fact that he was missing his family in Sydney as a major factor in his decision to return to Australia. And no one can really argue with that.

But the negative reaction to him by the rugby union media has also played its part, with Sam apparently taking the blame for England’s early exit from the recent World Cup.

Last weekend there were particularly silly articles by Paul Ackford in The Times on Saturday and Stephen Jones in The Sunday Times.
How on earth anyone could blame Sam for England’s lamentable performances is quite beyond me. Against Wales, England collapsed after Sam had been taken from the field, and against Australia he didn’t get onto the field until around 70 minutes, when he proceeded to put his winger Anthony Watson into space and he made almost 50 metres. Who knows how that game might have gone if Sam had been on the field from the start?
The England coach Stuart Lancaster made two tremendous errors – first of all by substituting Sam against Wales and then not selecting him from the start against Australia. None of that was Sam’s fault.

Sam had been moved into the forwards by Bath coach Mike Ford essentially because Bath had a multitude of talent in the centre positions.

But Sam equipped himself superbly as a flanker, playing his first game in that position in April and winning five turnovers in his new role, which was two more than any other player in the Aviva Premiership that weekend.

In his second game as a flanker he scored one of five tries in Bath’s 43-18 win against London Irish and was given the award as man of the match.

A month earlier Sam had again topped the Opta Stats, but this time for offloads while he was playing at centre, completing five, which was again more than any other player in the Aviva Premiership.

Rugby union journalists are accusing him of failure, but none of that sounds like failure to me.

But it wasn’t enough for Sam. It didn’t give him the satisfaction that Rugby League gives him.

“In Rugby League, I used to get to certain times in the game when I was completely, physically gone. You feel like you are out on your feet, with the ball being in play for so long and my point of difference at times in League was being able to beat that, mentally, and help a few of the other boys get through it as well,” he said.

“That’s what I enjoyed in Rugby League; getting to that tough period as a player and getting through it.

“Looking back, that’s what makes me love the game so much; the actual physical battle of it. Yeah, union is tough, there are tough parts of it, but I never found myself reaching that point. League took me to places I’d never been before in games but I never found that in union.”

My initial reaction to Sam’s dilemma was to hope that he would complete the remaining two years of his contract at Bath, so that the rugby union media wouldn’t be able to accuse him of cutting and running, while tarring all Rugby League players with the same brush.

They have now done that mercilessly, with acres of newsprint devoted to their opinions and no doubt more to come.

But once Sam decided that he was definitely leaving Bath I had hoped that Leeds chief executive Gary Hetherington would be able to exercise his powers of persuasion to get him to Headingley.

I’m not convinced that Sam is acting in his own best interests in returning to the Rabbitohs.

He had a gloriously successful season with them in 2014, culminating in a Grand Final victory when he played almost the whole game with a broken cheekbone.

No doubt the Souths fans will be expecting him to replicate that success.

But in my view it’s almost impossible to replicate something as wonderful as that.

On the other hand, Sam has never won a major medal in this country, and I would have loved to see him having a crack.

I wonder whether we will ever get the chance to see him trying to do so.