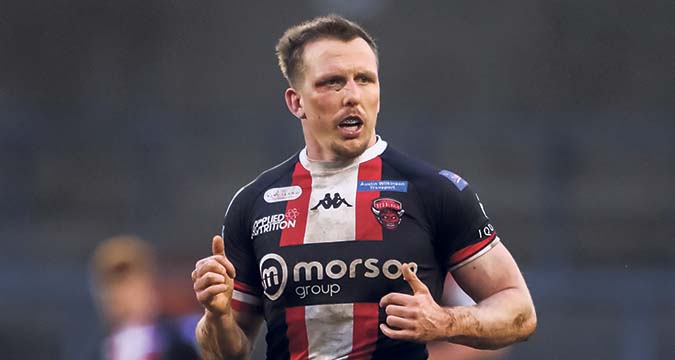 Salford fullback Dan Sarginson says the Red Devils have masses of potential to fulfil and are remaining positive despite their round one loss to St Helens.

Salford were competitive against the defending champions, and cut the lead to 13-6 in the second half, but could not stop Saints finishing strongly in a 29-6 win.

“We made too many errors,” Sarginson admitted.

“We didn’t complete enough and they just stuck to the basics pretty well. But on our day, if we completed a bit more and had fewer errors and were a bit more clinical, we’re probably in the fight there in the last ten minutes.”

“When you look at that Saints team they haven’t had too many changes and they carry their structure though year on year,” the 27-year-old said.

“But we’re faced with a different challenge. One of the boys mentioned how many new faces we have and the pre-season was so long it didn’t really feel like that. But looking back it’s our first game in, we’ve got masses of potential to fulfil and we’re looking positive.”

Sarginson was preferred at fullback over new signing Morgan Escaré, and he enjoyed the role at the back.

“I’ve still got some bits to work on but I’m glad they’ve given me the opportunity and I want to keep the spot. I’ve played at fullback quite a few times and just relied on effort to get me through, but if I want to make that my regular position I need to brush up on the intricate details of it.”

Friday’s match was Sarginson’s 200th career appearance. The outside back has enjoyed spells with the Broncos, Wigan, Gold Coast in the NRL and Salford and he’s represented England.

“I was over the moon to play my 200th and hopefully get up to 300 now, setting the bar a bit higher. It’s a good milestone and I enjoyed it.

“My debut (for London in 2011) feels like forever ago. I’ve had a few head knocks since then so the memory of playing back then is just on videotape for me.

“But it’s been mad and when you look at people like Kevin Brown, who’s nearly done 20 years, it’s just amazing how players do it. I’m only halfway and with all the niggles we pick up it makes it even more amazing when you see those players like James Roby with 500 or more.”