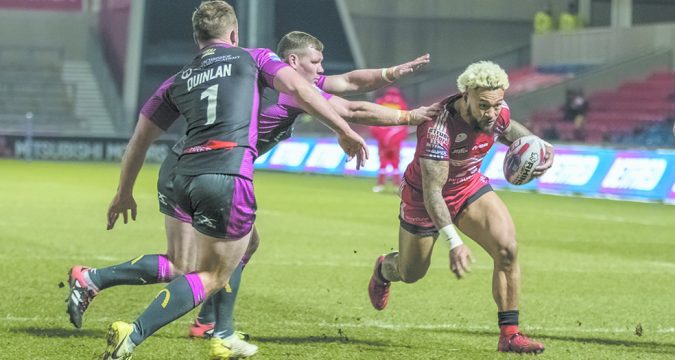 Salford Red Devils centre Junior Sa’u has opened up about his battle to beat the demons in his life with the help of a sports psychologist.

Since his arrival several years ago, the centre has proven to be one of the most popular figures at the Red Devils, both on and off the field.

But in a candid interview with League Express, the 31-year-old revealed how he’s been seeing a psychologist for over two years to help him battle his issues, stopping them from being a detriment to his form on the field.

“I have my own sports psychologist that I work with,” he said.

“She’s helped me to focus on myself and what I have control of, which is performing and training hard each day so I can prepare for a good game.

“You can be the fittest bloke on the field, but if you’re not mentally right, you see what happens out there all the time. I want to be strong in the mind to help me deal with my demons better than others.

“I’ve been working with her for the last two-and-a-half years. I’m not quite where I want to be but I’m heading in the right direction. My focus is to help people around me, especially where we’re going now. Sometimes people focus on the things they don’t have control of and forgot what they do. That’s preparation!

“Sometimes there are days when I’m not feeling right, but my main focus is staying positive and that’s off and on the field. When things aren’t going right I try to embrace it. I think it’s important you stay positive through tough times, because when you get through those tough times you laugh about it.”

The upcoming two months promise to be mentally demanding for the Red Devils, with the implications of failure in the Qualifiers well documented.

However, Sa’u has warned his team not to worry about the consequences, but rather on getting the results.

“There’s no point dwelling on it,” he said.

“At the end of the day it’s just another footy game.

“Just don’t put the pressure on yourself. Regardless of it being a Middle 8s thing, it’s just another game and you’ve got to go through the process you’ve been through all year. It didn’t go to plan this year but we’ve got to move forward.

“What happens outside of our control is nothing to do with us. We have people taking control of that and my job is to perform on the pitch.”