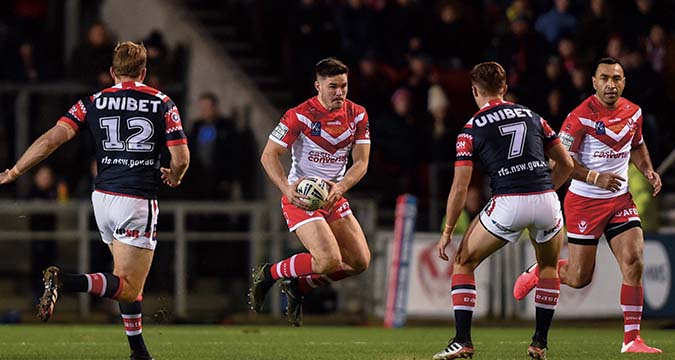 James Bentley says his decision to stay at St Helens came down to a belief in his own ability.

Bentley, 22, put pen-to-paper on a new one-year contract, despite interest from Castleford and Hull Kingston Rovers.

While regular game time was more likely to present itself away from the Super League Champions next season, former Bradford player Bentley has made the decision to stay and earn his place, confident that he’ll nail a regular position down after making 26 appearances in just over two years at the club.

“Obviously there were a few other clubs interested in me,” he said.

“But I’m happy at Saints and I wanted to stay. The team stayed together and I want to remain a part of it.

“There’s an opportunity for me to establish myself if I keep working hard. I’ve been working my way into the team and starting to put a run of games together.

“There was the thought there of getting more games, but I’ve backed myself to work hard, train hard, impress and get those opportunities at Saints. If I keep playing well I can make sure I get the game time I want.”

Used as a utility so far this season, Bentley knows where his best position is.

“I reckon back-row or loose forward is my best position where I see myself playing long-term. But wherever I can get a game at a young age, wherever I’m playing I’m happy and learning.

“I can’t wait to get back, it feels horrendous not playing. It’s as long as I’ve gone since being a kid. I don’t mind backing up once we get going either, because I’ll get more game time and opportunities to play.”