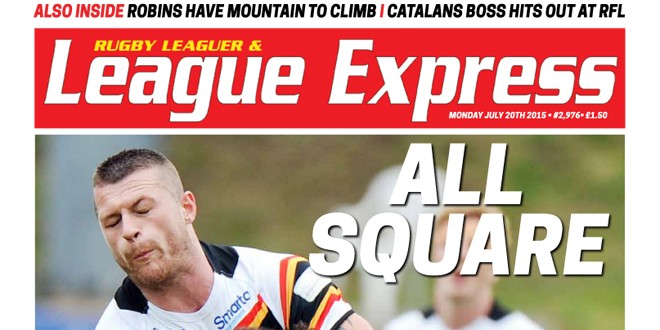 Another week has been and gone but our love for providing you with the best, most extensive coverage of Rugby League remains as fierce as ever.

Finally, with just one round of regular league action remaining, we almost certainly know which teams shall contest the Super League, Qualifiers and Championship Shield after another week of thrilling action.

Yet staggeringly, the on field action has almost been overshadowed by some incredible stories off the field, and we can’t wait for you to read all about them in this week’s edition.

There are 40 pages worth of Rugby League content in our paper this week, and here are just seven of the reasons why it isn’t an opportunity to be missed.

1. It was a horrid evening for Salford on Friday as they were annihilated by Leeds, which confirmed their place in the Qualifiers and a fight for survival as a result. If that wasn’t bad enough, Rhinos chief Brian McDermott launched a scathing and sensational attack on Red Devils owner Dr. Marwan Koukash. This explosive story is strongly documented on page three.

2. Just when Salford thought the worst had passed, our very own Garry Schofield chimed in. In this week’s ‘Pulling No Punches’ Garry describes the club as an ‘embarrassment’ and sympathises with Adrian Morley. This isn’t a piece you should miss.

3. It might have been a torrid week for Salford, but for Sheffield Eagles, it was sublime. In their 1,000th ever game, the Eagles celebrated in style as they secured their place in the Qualifiers with victory over Featherstone. If that wasn’t enough, we’ve paid tribute to the Eagles too, as Martyn Sadler praises their incredible rise up the Rugby League ranks, whilst Gareth Walker focuses on Sheffield’s success in this week’s Championship Focus.

4. Could Chris Sandow be on his way to Warrington? This long-standing rumour appears to be coming to a conclusion, but are the Wolves happy about it? We have quotes from Tony Smith and Parramatta Eels coach Brad Arthur.

5. Speaking of Tony Smith, he has been a busy man in the press this week as he weighed in on the structure of reserve grade Rugby League. Smith and Wigan head coach Shaun Wane have been highly critical, but how do the RFL feel?

6.Could we pay the game between Leigh and Bradford higher praise than leading with it on our front page? All the action from this thrilling game, plus the best coverage from the games in Super League, Kingstone Press Championship and League One are in League Express.

7. Our Mailbag never, ever disappoints. In what is another excellent read, our readers have voiced their opinions on Sky’s television coverage, bonus points and referees. We’ve even received a letter from a Newcastle councillor!

This week’s League Express is out now. Buy yourself a copy for the best coverage of Rugby League available.