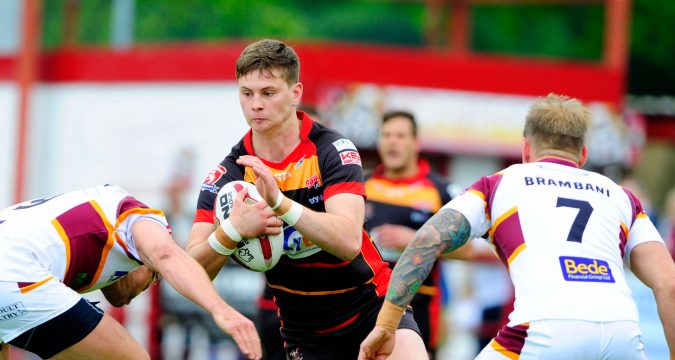 Sheffield Eagles are set to complete the signings of Dewsbury pair Aaron Brown and Josh Guzdek.

TotalRL can reveal the Eagles’ heavy recruitment for the 2019 season has continued with the arrivals of the Rams pair, who have been two of their key players over the last several years.

They will join the likes of James Davey and Jason Crookes at the Eagles next season, with Mark Aston wasting no time strengthening his squad after three disappointing years.

It’s understood the Eagles are closing in on a number of impressive signings from clubs in and around them in the Championship.

In Brown and Guzdek, Sheffield have prized away two of Dewsbury’s most prized assets. Brown, a loose-forward, has established himself as a reliable and consistent forward at Dewsbury, while fullback Guzdek has played a pivotal role for the club since joining them in 2016 following his release from Hull Kingston Rovers.

The 23-year-old has been linked with a move away from Dewsbury on several occasions due to his impressive form, making his move to Sheffield a significant coup for the club.

Sheffield have endured three difficult years, finishing in the bottom half of the table. Their tenth-place finish this year was their worst performance since earning promotion back to the Championship in 2006.

However, the Eagles look set to take flight again next season in what is likely to be the most competitive Championship campaign in recent history.