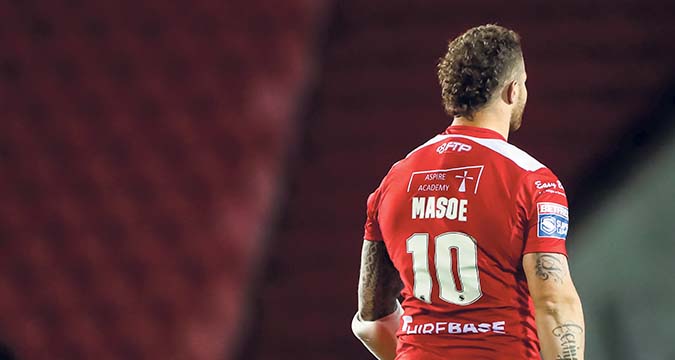 Korbin Sims might be struggling to get his head around the concept of Cup competitions.

But thanks to his brother Ashton, the Hull KR prop knows all about the allure of Wembley.

And he’d love to go one better than the former Warrington forward, who featured in the 2016 Challenge Cup Final defeat by Hull at the national stadium.

Tony Smith’s side host Castleford in the third round on Friday in a repeat of the pre-season Adam Milner testimonial match, in which Sims, 29, pulled on a Rovers shirt for the first time since his move from St George Illawarra on a two-year contract.

The outcome was a 30-20 defeat, but the Fiji international, who also played for Newcastle and Brisbane Down Under, is confident his side can make the quarter-finals.

“Having been in Australia, Cups are a bit of an unusual concept,” he smiled.

“It seems like a bit of a competition within a competition. I’ll have to brush up on my history to appreciate it properly.

“But it’s a chance of another game, and I’m all for that.

“And of course I know Wembley is a world-famous stadium. I remember Ashton playing there, and he had nothing but good things to day about the place. I’d love to get a taste of it for myself.”

Sims bring the experience of more than 140 games in the NRL, plus nine for Fiji, including three at the 2013 World Cup.

And he’s looking to use that knowledge, as well as his physical prowess, to add a bit of punch to the Rovers pack.

“I like to be aggressive in a controlled way,” explained the youngest of five Rugby League-playing siblings (Tariq plays for St George, while Ruan was the first woman to sign an NRL contract, with Cronulla, and also played for St George, while his other sister CJ is with Fiji Bulikula).

“If I can be aggressive towards the opposition, then hopefully the whole team will be able to get on the front foot, make them kick out of their own half and then we start with the ball in a better position.”

Last Thursday Sims played with a number 10 shirt bearing the name of Mose Masoe, as the whole round of Super League fixtures was dedicated to the former St Helens and Hull KR star.

But unfortunately he suffered a concussion and had to leave the field, although the eight-day gap between that game and Friday’s Challenge Cup game means that he will be able to play if he can demonstrate a full recovery from that injury.