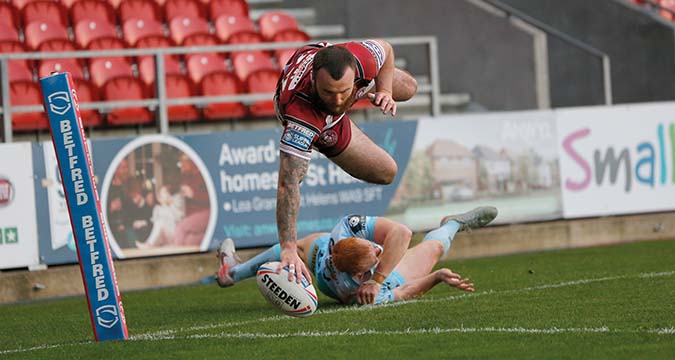 Not many Rugby League pundits would have put their money on Wigan’s Jake Bibby sitting at the top of the tryscoring charts after two rounds of the Super League season.

But Bibby, who is equally at home in the centre or on the wing, is sitting pretty with five tries, two ahead of his nearest rivals, after his hat-trick against Wakefield on Thursday backed up the two he scored against Leigh six days earlier.

“It’s one of the things I didn’t really expect to happen,” admits Bibby.

“Wigan’s right edge is having some joy and that is down to Willie Isa. To play his 150th game for Wigan and to perform like that shows he is a real leader. He is all about what Wigan is about and he’s a great bloke to play with.”

“I don’t think I’ve ever been the top tryscorer before, but I’m getting some opportunities and it’s good to take them. I am focused and I’m enjoying my rugby.

“But I do prefer centre and I’m a better attacking centre than winger, although I also played in the back row at Salford.

“I’ve built myself and I’m now coming into my own. I’ve now played enough games to put me in a senior position.

“I know there are some people who doubt me, but I don’t read into it a lot. It bothers my family more than it does me, but I back myself to prove those people wrong. When a Wigan lad is coming to play for his hometown club actions speak louder than words.

“But I’m not one for talking about how good I am. I just want to play

“When I came to Wigan I wanted to be around these players who are used to winning trophies, then there are the youngsters coming through. Wigan is so competitive.

“One of my biggest goals is to get a Grand Final winners’ ring. At Wigan you are expected to play in finals and win them.

“We have a really good strength and conditioning guy in Ian Bentley. I’ve never felt as strong and fit as I do now.

“No matter what happens in a game, even when we are down we are going to come back with all guns blazing.

“It was a dream playing for Wigan, but one of the things I never expected. But now I’m here I’m going to give it everything I’ve got.”