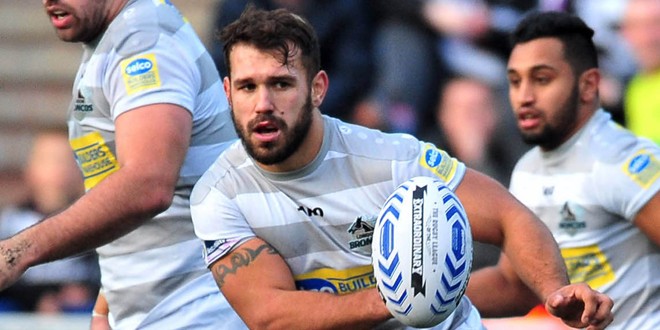 Six Super League players were charged after incidents involving them were shown to the RFL’s match review panel.

Five incidents took place in round two of Super League, while the sixth was in Saturday’s World Club Challenge, which was won by Sydney Roosters.

London Broncos hooker Scott Moore has been charged with Grade D dangerous contact on Darrell Griffin of Salford Red Devils in the 56th minute of the fixture at The Hive on Sunday February 23.

Julian Bousquet of Catalan Dragons has been charged with making Grade D dangerous contact with Castleford Tigers player Jordan Tansey in the eighth minute at The Mend-A-Hose Jungle on Sunday February 23.

Dean Collis of Wakefield Trinity Wildcats has been charged with making Grade C dangerous contact with Bradford Bulls player Lee Gaskell in the first minute at The Rapid Solicitors Stadium on Thursday February 20.

Justin Poore of Hull Kingstone Rovers has been charged with Grade B punching in the 20th minute of the fixture at The John Smith’s Stadium against Huddersfield Giants on Sunday February 23.

Huddersfield Giants centre Joe Wardle has been charged with Grade A punching in the 20th minute of their home fixture against Hull Kingston Rovers on Sunday February 23.

Wigan Warriors forward Eddy Pettybourne has been charged with a Grade B dangerous tackle on Sydney Roosters player Shaun Kenny-Dowall in the 38th minute of the World Club Challenge on Saturday February 22.

Collis and Pettybourne have until 11.00am on Tuesday February 25 to submit Early Guilty Pleas. Moore, Bousquet, Poore and Wardle do not have the option of submitting EGPs and will appear before an RFL Disciplinary Tribunal on Tuesday evening.