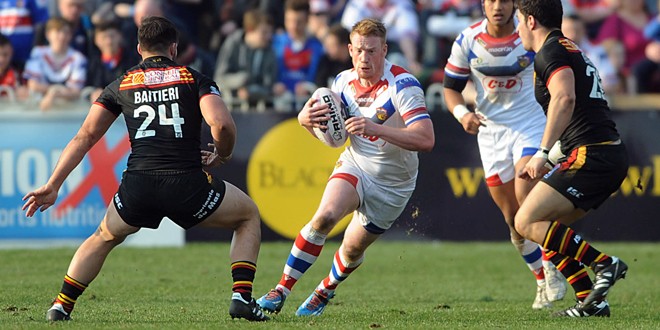 With the business end of the season fast approaching, at TotalRL.com, we’re gearing up to have a look at the best moments from what has been an incredible 2014 season.

And amongst all of the highlights of the year, there have been some sensational tries scored in Super League this season. However, which has been the best? That’s the focus for this week’s Six of the Best; we’ve been polling you on social media to try and find out what the six best tries are – and you certainly gave us a few nominations.

There can only be six though, so here they are – we hope you agree with us! Does one stick out more than the rest? Comment below and let us know your favourite.

Daryl Clark (Castleford Tigers) – v Widnes Vikings (a)
The hooker scores arguably one of the best tries of his entire career; picking the ball up from dummy-half before going unchallenged for 70 metres against Widnes.
//youtu.be/2DGabY2301I

Chris Riley (Wakefield Trinity Wildcats) – v Salford Red Devils (h)
An exceptional team try from as recent as last weekend – as Wakefield score an incredible try against a helpless Salford. An outrageous pass from Tim Smith initially created the break, before the move was finished with a great kick from Paul McShane, who put Chris Riley in.
//youtu.be/uoxWjumqULE?t=51s

Rob Burrow (Leeds Rhinos) – v Hull KR (h)
The little hooker produces a moment of magic in a game that was incredibly tight at that point; breaking the line before fooling Greg Eden with a great dummy.
//youtu.be/lFKLuX0oTAg

Jamie Ellis (Castleford Tigers) – v Hull KR (h)
A classic try on the counter from Castleford; after Hull KR spill the ball deep in Cas territory, the Tigers break away with real style. A superb offload from Jake Webster eventually sends Kirk Dixon away – with Ellis racing home to finish off a great move.
//youtu.be/vBNEiD8Tx-g?t=1m49s

Tom Makinson (St Helens) – v Castleford Tigers (a)
Outrageous finish from the St Helens winger, finishing off a sweeping move with a trademark diving finish in the corner – using the post to full effect.
//youtu.be/uRzGZkgc06o?t=1m43s