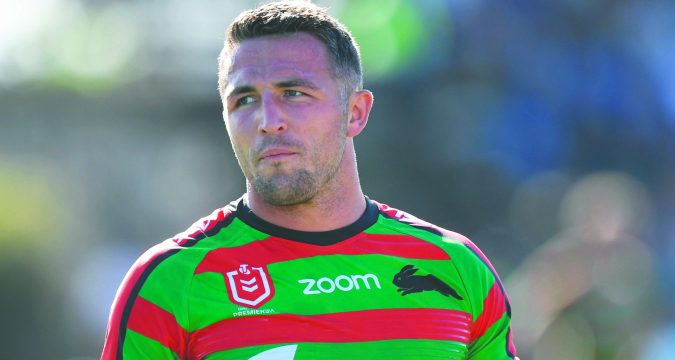 Sam Burgess has opened up on the shoulder injury that forced him into early retirement.

Slammin’ Sam, one of England’s greatest ever players, was forced to hang up the boots at the end of last season due to chronic shoulder problems.

Speaking for the first time about how his retirement came about, the 31-year-old told the Out Of Your League podcast that playing with septic arthritis had caused enormous damage to his body.

“We went in for surgery, we cleaned it up but it wasn’t really improving after surgery,’ he said.

“Three weeks later after surgery I went to see the surgeon and said I was playing next week. He said ‘no you’re not, you can’t play.’ He said I had an infection in there.

“We had a pretty direct conversation with each other. He told me I couldn’t play and should think about retiring because my shoulder, the damage in there, he’d never seen a shoulder as bad, those were his exact words.

“But I said I couldn’t retire now, I’m not ready at all plus we’re midway through a campaign and going so well. So the next thing on the list was to get rid of the infection. So I had a PICC line in my right arm, I had 50 mc tube and a drip on my 24/7. I had to go to the hospital every single day and get a new drip on for four and a half weeks.

“I started playing and I was so far off the pace in terms of physically and fitness and my shoulder just wasn’t what it used to be. The pain was through the roof and I got to a point where I knew I was done, even with games to go.

“But I was captain of the team, I couldn’t show anyone I knew that so I was keeping in secret for a while whilst trying to convince the team we could win the competition.”

Even now, Burgess admits his shoulder is still causing him pain.

“It’s not great now, I go and do a tiny bit of running or I tried to play a bit of golf and its sore as hell for a week. There’s no way I can keep on playing at the top level.

“It’s not looking fantastic. I had septic arthritis in there, but because I played on it for six or seven games I caused so much damage in my shoulder.”