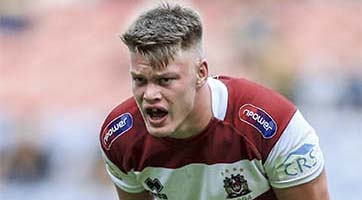 Morgan Smithies is among the players called up to the England Knights squad for the weekend’s clash with Jamaica.

Smithies, the Albert Goldthorpe Rookie of the Year, will cap a fantastic maiden year with international honours after being selected in the squad.

He’ll be joined by fellow teenagers Harry Newman and Harry Smith, who were all a part of last year’s England Acadamy squad that defeated the Australia Schoolboys last year.

Knights head coach Paul Anderson said: “I think this squad shows why it was so important for the Knights to play this autumn.

“You can see from the Great Britain squad selected yesterday how much guys like Jack Hughes and Joe Philbin benefited from going to Papua New Guinea with the Knights last year.

“The other part of the pathway is young players such as Harry Newman, Harry Smith and Morgan Smithies coming up from the Academy after outstanding performances against the Australian Schoolboys last autumn, and then building on that with their club performances this season.

“The average age of the squad is only 22, and 12 of the 19 will be hoping to win their first Knights cap. That makes it an exciting squad to be around, and with attractive opposition in Jamaica, we hope Rugby League supporters will be keen to watch our next generation in international action next weekend.”