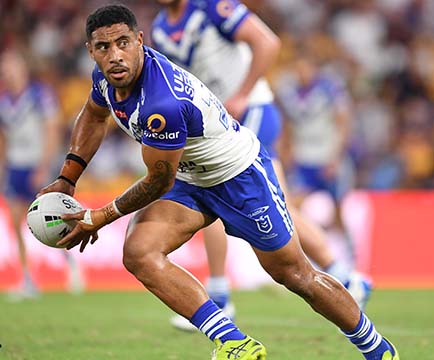 League Express understands Katoa, who is off-contract at the end of 2021, is one of Saints’ recruitment targets for 2022.

Katoa is a Tongan international who St Helens coach Kristian Woolf, who is also the head coach of the Pacific nation, knows well.

With veteran James Roby currently unsigned for 2022, and turning 36 in November this year, the Red V are planning for the future for their number 9 position.

Aaron Smith, 24, is the current number two for the hooking role at the Totally Wicked Stadium, and his contract runs until the end of 2022.

Youngster Lewis Dodd has also filled in at hooker at times this season, but he is a halfback and is expected to move into the halves next year, especially if French playmaker Theo Fages, who is also off-contract at the end of 2021, departs the Totally Wicked Stadium.

But it is believed the Super League champions want to sign Katoa, who was born and raised in New Zealand.

The 26-year-old started his NRL career with Penrith and made 47 appearances for the Panthers.

He left the club at the end of 2019 to join Canterbury.

This season Katoa has made eight appearances for the Bulldogs and recorded one try assist. He is averaging 35 running metres and 28.3 tackles per NRL game.

The hooker, who has both Tongan and Cook Islands heritage, debuted for the Mate Ma’a in 2015 and has played eleven Tests, playing in all their matches in the 2017 World Cup and also featuring in the Tongan team that defeated both Great Britain and Australia in 2019.