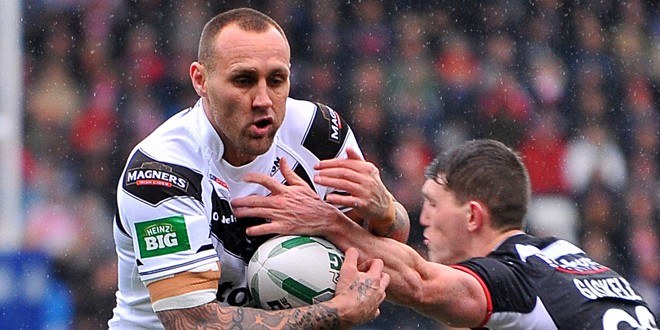 Salford second-rower Gareth Hock has accused England coach Steve McNamara of being a coward and says he will refuse to play for his country while he is in charge.

The 30-year-old was thrown out of the England World Cup squad just days before the tournament opener against Australia in late October. He is said to have slept in the morning after an unsanctioned drinking session.

McNamara sent Hock home and disciplined the other players who were in attendance. He never publicly stated who was involved but dropped a few big names, including James Graham, for the Australia clash.

“I have lost all respect for him because he did not sit me down like a man and tell me to my face,” said Hock.

“I just got a phone call – he sat the others down and told them what he was doing, but he just rung me up and I think that’s cowardice.

“While Steve McNamara is still there I do not want to be part of the England team. I would not play for him again. I still think it was harsh what happened to me in the World Cup and I don’t think I deserved to be kicked out like that. I will always think that.

“We should not have gone out drinking but it wasn’t me on my own. There were others and I didn’t do anything bad. I’d put a lot of hard work in to get into the England team but the way he handled it made me look really bad.”

Zak Hardaker was thrown out of the squad just days after Hock’s dismissal and England went on to lose out in a heart-breaking semi-final against New Zealand. Despite the loss, McNamara was given a one-year extension to his contract on a part-time basis.

Outspoken Salford owner Dr Marwan Koukash disagreed with the re-appointment. He said: “We should look at people who really want the job and are going to be passionate for the job.

“With no disrespect to the other teams in the World Cup, we finished third in a three horse race. We have world class talent in the team and we should be planning for the next World Cup now in order to win it.

What do you think? Was McNamara wrong to single out Hock? Were the RFL foolish in reappointing the former Bradford manager? Let us know by commenting below. You can relive England’s heartbreaking World Cup exit by watching this video.