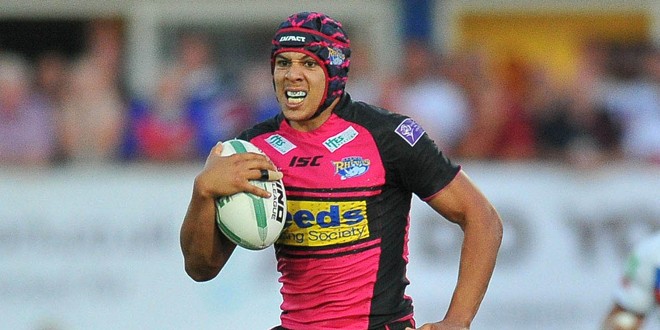 Leeds Rhinos winger Ben Jones-Bishop plans to let his performances do the talking in his pursuit of a permanent place in Brian McDermott’s starting 13 this season.

The England Knights star, 25, has been a Rhinos regular since 2011, scoring 46 times in 71 appearances. However, in the offseason, McDermott signed England winger Tom Briscoe, and it is rumoured the former Hull flyer will be his first choice on the right flank.

Indeed, in Ryan Bailey’s testimonial against London last week, Briscoe was started and scored on his debut. Jones-Bishop hit back with three tries of his own off the bench, though, making McDermott’s decision even harder.

“I just get on the pitch and do the best I can,” said Jones-Bishop when asked whether he thought his hat-trick put him in a strong position.

“Obviously competition is strong so you have got to be at your best all the time to try and get in the team.

“That’s what you are going to have to do [fight for your place].

“I think it is good for the club, we have got a lot of strength in depth and it means whatever happens – injuries, lack of form or anything like that – there’s a replacement ready to come in of very good quality.”

Brian McDermott said no decision has been made on his back three just yet. He told TotalRL.com: “It’s nice [having an all-England backline], but the competition for places is the most significant thing for me.

“Everyone mentions BJB because we brought in Briscoe, but in actual fact Tom Briscoe’s addition will affect everyone – Kallum Watkins, Zak Hardaker, Joel Moon. Well, Moony is in a bit of a different position as he can play centre and maybe a bit of halfback, he’s not really a full-back or winger, but Kallum, Hally [Ryan Hall], BJB, Zak, they can all place centre, they can all play wing, and they can all play full-back, so there will be a bit of roving about this year.”

McDermott said Zak Hardaker is going to be his first-choice full-back for the start of the season but claims he’s still undecided on his wingers.

If you were Brian McDermott who would you start as your back three? Let us know by commenting below. And watch the following video to see all three of BJB’s London tries.