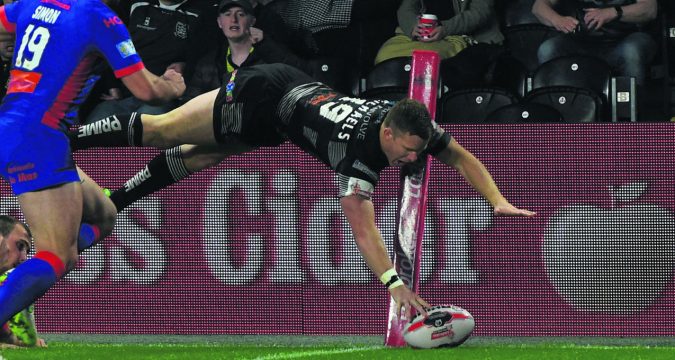 Hull FC have confirmed that winger Steve Michaels will leave the club at the end of the season, along with a number of young squad members.

Michaels, who joined the club in 2015 from Gold Coast Titans, was out of contract at the end of the 2017 campaign and will now return home to Australia.

The 30-year-old has made over 70 appearances for the Black and Whites, scoring 30 tries during his three seasons with the back-to-back Challenge Cup winners.

The former Brisbane man was a part of the historic Cup-winning side in 2016, where the Airlie Birds lifted rugby league’s oldest and most prestigious prize for the first time at Wembley.

The club have also confirmed that youngsters Mike Adlard, Connor Bower, Zeus Silk and Jack Wray will also leave at the end of 2017.

The four youngsters are yet to feature in the first-team and have spent the remainder of the current campaign on loan at League One sides and on dual registration with Doncaster, whilst Adlard has also represented Hull RUFC.

The club have already confirmed that captain Gareth Ellis will retire at the end of the season, while Mahe Fonua will join Wests Tigers in Australia.

Coming the other way from the NRL to join Hull in 2018 are winger Bureta Faraimo and returning prop Mickey Paea, whilst Dean Hadley, Jordan Abdull and Jack Logan will all return after loan spells to push for a place next season.

Hull FC head coach Lee Radford said: “Stevie has been a fantastic signing since he landed and he’s always given 110 per cent whenever he’s played for Hull FC.

“He’s a very committed player and hopefully, like the other guys who are leaving at the end of the season, we can send them out on a high note.”