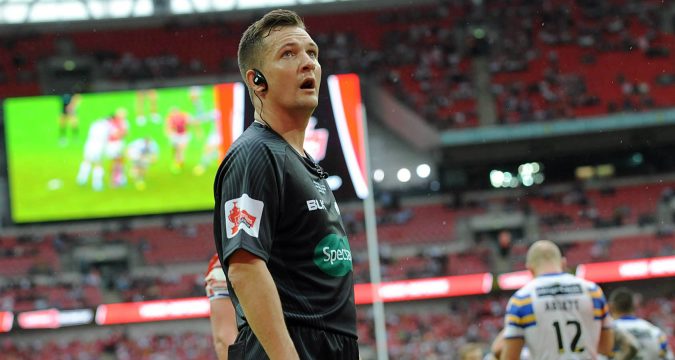 Another week, another referee debate.

It’s unfortunate really that referees are thrown into the spotlight so often – I guess the media are perhaps more guilty than most: especially the ones who writes columns about them!

But this isn’t a damning view on one referee’s performance from last weekend. It’s more a look at what supporters – and even players, coaches and the media – are right to be able to say about referees.

There have been some who have suggested that refereeing standards are one of, if not the, biggest problem facing rugby league right now. I’d disagree with that – I think the sport is facing a vast number of off-field issues more significant and important than the whistle-blowers.

Some of the abuse – and it is abuse – referees face on a near-weekly basis is appalling. A quick search on Twitter for any referee’s name will usually find some unfortunate results, and ones that don’t really put the game in a good light. But it’s not exclusive to rugby league.

Abuse is unacceptable – but is constructive and fair criticism of performances? I would say not; surely all supporters are entitled to their opinion on all aspects of the game – including the standard of officiating? There is bound to be a response from those who disagree with fans critiquing referees, perhaps suggesting that referees are already subjected to criticism and feedback from their bosses – so why should fans do it?

And that’s okay: because everyone is entitled to their opinion.

Fans spend a lot of money watching rugby league: a heck of a lot, in fact. To suggest they shouldn’t be allowed an opinion is, in my view at least, completely unfair.

It’s a murky area, as one man can interpret criticism as abuse: essentially, it’s a very subjective matter. But if it’s clean, it’s well-thought and it is fair, then what’s the problem?

Being a referee is a tough job – and the low numbers in the sport currently officiating indicates how it is a thankless task. But that doesn’t mean they should escape criticism if they’re underperforming. It’s the same as any other job in any walk of life.