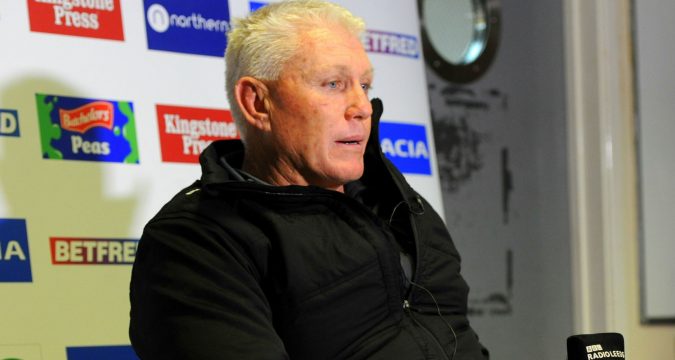 Huddersfield head coach Rick Stone believes his side was taught a harsh lesson following their 38-12 defeat to Hull FC.

The Giants had started superbly to establish a 12-4 lead just before the break, with the kicking game of new-look halfback pairing Danny Brough and Jordan Rankin helping the Giants control the game.

But they conceded just before the break and leaked five further tries in the second-half to ensure they were on the wrong side of a heavy scoreline on the opening night of the season.

Stone, who has emphasised the importance of consistency for the Giants this year, was left to rue his side’s Jekyll and Hyde performance.

“Once we got into a groove we got into the contest. I’m pretty disappointed that they scored a try just before half-time because we worked hard for our two tries. But pretty much after that we handed Hull plenty of opportunities with errors, kicking out on the full and we camped ourself in our own half.

“After that we panicked a little bit and it was a bit of a train crash after that. The way we competed in the first-half wasn’t reflective of the final score.

“It wasn’t hopefully a fair reflection of where we want to be or what we want to stand for. But it’s a good lesson that’s for sure. All the boys realise that they’re better than that and they’re disappointed that’s the scoreline that went on the board. The reality is that’s what it was and we’ve got a bit of work to do.”

The evening proved to be a tough one for returning fullback Jake Mamo, who struggled under high kicks and conceded the penalty that resulted in Hull’s try just before the break. Stone acknowledged the fullback wasn’t at his best, but believes he will need time after recovering from a serious ankle injury.

“I think I said before that game that I didn’t expect to see the best of Jake.

“We spoke before the game about doing the basics well. He’ll be disappointed that he didn’t do that tonight, there were a couple of things that weren’t great. He showed a couple of glimpses of what he can do but it is going to take him a bit of time to find his feet again and his niche in the team.”

Meanwhile, Seb Ikahihifo required several minutes of treatment near the end of the game after going to the floor after being substituted. However, Stone eased fears of any major concerns.

“I think he was totally exhausted to be honest,” he said.

“He hadn’t played in any pre-season friendlies after a little hiccup when he was back home at Christmas. He had done plenty of work but there’s nothing like playing the intensity of the game and like the coach upstairs I think he was a little bit shocked as well. He’s alright, he probably didn’t look in a great way but he’s settled down and he doesn’t look too bad.”