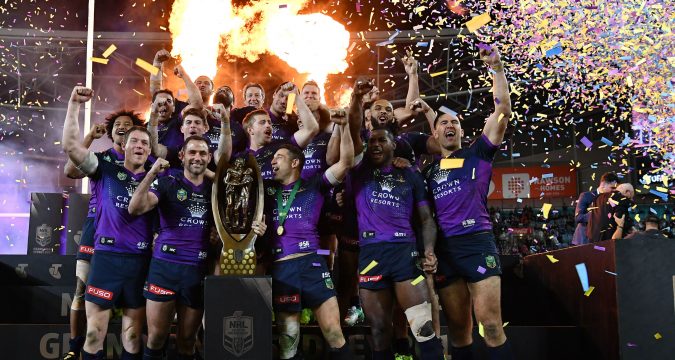 There were promising signs in attack for Canterbury Bulldogs supporters, but they were unable to hold out the NRL Premiers Melbourne Storm, who scored six tries in all in turning a 12-point lead at the break into a 36-18 victory at the final hooter in the second game of today’s double header in Perth.

The Bulldogs opened the scoring with a relatively easy try to Raymond Faitala-Mariner in the third minute, but the Storm hit back when Ryley Jacks supported a charging Nelson Asofa Solomona to draw level with Cameron Smith’s conversion.

Curtis Scott gave Melbourne the lead after 15 minutes before Brett Morris crossed in the corner to level the scores again.

But Josh Addo-Carr then raced away downfield to give Melbourne an 18-12 lead on 29 minutes and Cameron Munster stepped through an attempted tackle to send Kenny Bromwich over just before half-time.

The Bulldogs struck first in the second half with enterprising play that led to a Matt Frawley try to make the score 18-24 but they couldn’t breach the Melbourne defence again.

The Storm scored two further tries from speedsters Addo-Carr and Suliasi Vunivalu for a convincing 36-18 scoreline, although the Bulldogs under new coach Dean Pay can be confident of opening their account soon if they can keep the attacking skills they showed in Perth while tightening up their defence against the counter-attack.