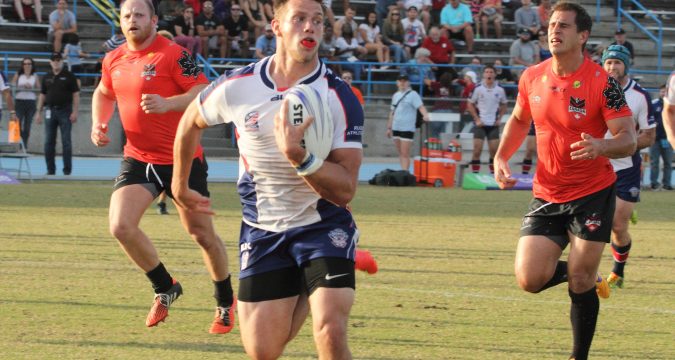 Toronto Wolfpack has announced that their North American players Quinn Ngawati and Ryan Burroughs will join League 1 side London Skolars for the remainder of the 2018 season.

Wolfpack coach Paul Rowley will monitor the pair closely throughout the season.

“This is a great opportunity for these boys,” said Rowley.

“The opportunity to move down a level to play some regular rugby is often a natural step in progressing many young players’ careers and it’ll be no different with these two.

“Our thanks have to go to the (London) Skolars and their coaching set up. Their ability to look after and nurture young talent on and off the field is second to none and we are excited to see how the pair progress. We thoroughly expect them to become stars for the Wolfpack for seasons to come.”

The offer of the two players to London Skolars reaffirms the Wolfpack’s commitment to supporting the development of Rugby League in London, among other global expansion areas. The Wolfpack will host Halifax RLFC in the Betfred Championship at the Skolar’s New River Stadium on Saturday 28th April.

Teenager Ngawati’s journey to professional Rugby League is one of unique origin. Originally from Victoria in British Colombia, he made the decision to travel to Vancouver prior to the 2017 season to take part in one of a number of trials held by the Wolfpack to prove himself on the big stage.

After a successful trial, he was the first Canadian to sign with Toronto and made his senior debut at only 18 years of age, coming on as a substitute in Round 14 of League 1 against Gloucester All Golds in front of the Lamport Stadium crowd. He finished the 2017 season with two first-team appearances.

Burroughs, although taking a different route to prominence at Toronto, moved from his native Virginia to the other side of the world in Australia. He played for Parramatta Eels feeder team Wentworthville for a season in 2016, impressing enough to attract the attention of the Wolfpack. He signed before the 2017 season and has made eleven appearances to date.

Having played for USA in the 2017 Rugby League World Cup in the off-season, injury has hampered Burroughs’ preparation for 2018. Consequently the move to London comes at an ideal time for the powerful winger who is looking to get back up and beyond the standards he set last year.

After five rounds of the Championship competition, both players are yet to feature for the Wolfpack. In making the switch to the Skolars both are hoping to become first-team regulars.

This agreement will see the players link up with their new team-mates next week.

Skolars coach Jermaine Coleman was delighted to bring in two promising players, confident the move would add a lot to both his side and to the players themselves.

“Quinn and Ryan are a magnificent addition to our playing roster and are two of the most coveted players of their respective age,” said Coleman.

We take real pride in providing opportunities for high quality young talent and their addition reinforces that mantra. They will bring a real energy to the group as well as extending their own learning amongst our senior players and coaching group.

“We have to thank the Wolfpack for their support in allowing Quinn and Ryan to join the Skolars project; they have been exemplary in our dealings with them. I’m confident our fans will enjoy their all action style and will welcome some of North America’s brightest ever prospects into the Skolars family.”

News and Reports from the Championship and League 1 will feature in Monday’s edition of League Express, available online and from newsagents.