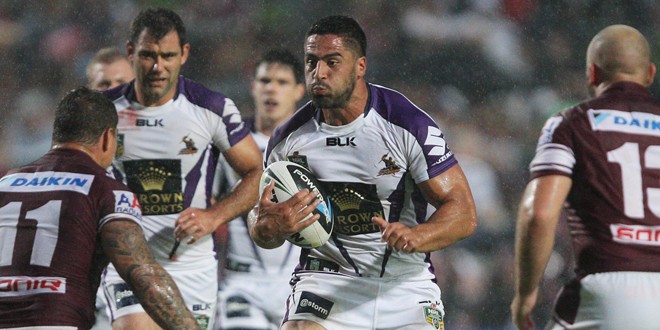 In a Nutshell
Manly established an early 20-0 lead in the first half, but Melbourne fought back heroically to lead 22-20, before grabbing an amazing 23-22 win in golden-point time from a Cameron Smith field goal.

How it unfolded
The Sea Eagles opened the scoring when Cheyse Blair touched down Daly Cherry-Evans’ kick to the corner, and Blair added a second soon afterwards when he took a pass from Jamie Lyon. Lyon converted to give the Sea Eagles a ten-point advantage after 12 minutes. Justin Horo and Steve Matai added two more tries for Manly, with Lyon converting the second, and the Sea Eagles looked to be out of sight after 30 minutes.

But then the Storm fightback began, with Sisa Waqa opening their account, although Cameron Smith couldn’t convert.

But in the second half Melbourne ‘stormed’ back into the game with three tries in nine minutes through Waqa, young stand-off Ben Hampton and Kenny Bromwich. Smith converted two out of three to bring the game level and then he added a penalty on 65 minutes to give Melbourne a lead that looked unlikely earlier in the game.

But with just five minutes remaining Lyon converted a penalty for Manly to take the game into golden point time. In a desperate struggle it was Smith who secured victory for Melbourne with a field-goal after five minutes of golden point time for a win that must rank with any that the Storm have enjoyed since entering the NRL competition in 1998.

Reports and pictures from all the NRL games will feature in Monday’s Rugby League Express, available in the shops and online at www.pocketmags.com