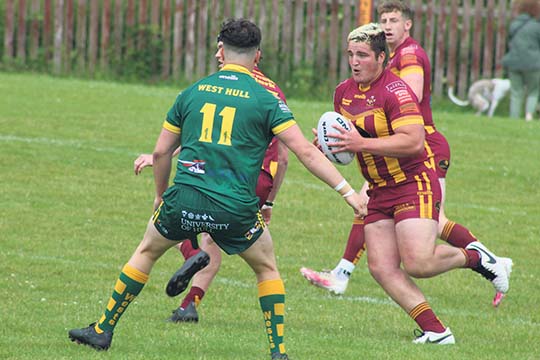 I imagine that National Conference League bosses may well be viewing this weekend’s programme with some trepidation, given last Saturday’s experience.

Unlike Underbank Rangers v West Hull (pictured), eleven of the day’s 21 scheduled fixtures failed to go ahead because of players having to go into isolation as the coronavirus pandemic threatens to spark up again. And one of those call-offs was, in a sense, more depressing than the rest, with Gateshead Storm announcing their withdrawal from the amateur game’s flagship league on the Wednesday prior to their League E trip to Dewsbury Celtic.

A spate of postponements followed on the Friday. None of the three games in League G, which is centred on Hull and York, survived. In addition, two matches went by the wayside in each of the Lancashire-based Leagues B and C, while the Cross-League fixture between Wigan St Judes and Waterhead was also postponed.

On the face of it, therefore, the situation seems to be worse in Lancashire than elsewhere, although the League A match between Cumbrian sides Egremont Rangers and Wath Brow Hornets was also pulled, as was the League D `derby’ involving East Leeds and Hunslet Club Parkside.

It’s worrying, and we’ll all have to hope that the first Saturday in July was a temporary blip, rather than a harbinger of things to come.

There were other issues affecting Gateshead, of course, and it’s very sad that the north east outfit has withdrawn from the amateur game’s flagship league.

I’ve a lot of time for the Storm who, as it happens, are aptly named, having ridden a storm of their own for several years, when wins were very hard to come by.

But to their eternal credit they stuck at life in the NCL, to the point where they became a side that wasn’t too far off being good enough to challenge for promotion from Division Three and maybe even kick on to bigger things.

However, Gateshead’s prospects have now been hit – temporarily, I’m sure – by the Covid-19 pandemic. It’s a situation that’s been exacerbated by the fact that a few stalwart players have grown old together (always a danger in team sports) and have retired, while coach Rhys Clarke is now playing for Workington Town.

Some current players are seeking work as we (hopefully) emerge from the lockdowns in these blighted times, and couldn’t commit to regular away games, some of which can involve a fair trek.

The Storm’s long-term future looks bright, though, given that the junior and youth sections are thriving. But in that they are, perhaps, victims of their own success, at least to a degree.

All amateur outfit are delighted when their players move on to the professional ranks. They tend not to be so thrilled though when such lads, if they don’t quite make it, fail to return to their grassroots clubs.

It’s an age-old problem, and one on which I’ve reflected many times over the years. In fact I retain a vivid memory of how, when I was media manager at Castleford Tigers around a quarter of a century ago, I sat down with the Tigers’ development officer and a representative of leading local amateur club Castleford Panthers to discuss this very issue, which was just as much a problem back then as it is now.

The consensus, as I recall it, was that more focus should go into mentoring lads who turn professional, with it being made clear that, should things not work out, a warm welcome back, and a comforting arm around the shoulder at both the professional and amateur camps, should be guaranteed.

It sounds simple, and in many ways it is, but it’s also a touch easier said than done, especially if the professional ticket has gone to a young lad’s head a little and he may have said one or two things before leaving his old mates which could potentially make a return to his roots a shade embarrassing.

All these possible factors should be addressed, I think (and I have to stress that I’m making a general, and long-standing point rather than anything specific to Gateshead Storm). But our sport would be all the healthier if strategic templates, even codes of conduct (I know, yet another task imposed on hard-pressed volunteers – I’ve been banging on about that recently, haven’t I? Sorry) could be created to seek to end an upsetting and debilitating pattern.

Meanwhile NCL clubs should shortly, as reported in this week’s League Express, be able to attend a meeting at which their chair Trevor Hunt and club representative Mike Denning will seek to explain the background to the RFL’s controversial club membership scheme.

Both will then answer questions from the floor in an effort to allay any abiding concerns.

Trevor Hunt, who I understand is a member of the Community Board, which has been working on this proposal for around a decade, will know a great deal about it anyway, I suppose.

It will be an interesting meeting.

Finally, what about this? I think it was last year that a letter popped up in our Mailbag asking why we had a `draw’ column in our Super League tables, given that `golden point’ has been introduced at that level to settle contests in which the scores are level on 80 minutes. Our editor pointed out that should there be no further score in extra time, a draw would be recorded – that column, therefore, is necessary.

What are the chances of a result still being a draw after the added period? Slim, you might say. Well, maybe not all that slim – it occurred twice in the National Conference League on Saturday (and in a truncated programme at that) with Thatto Heath Crusaders and Wigan St Patricks finishing all-square after 90 minutes, and the same thing happening in the game between Dewsbury Moor Maroons and Eastmoor Dragons. Crosfields and Rochdale Mayfield were not so parsimonious, though, the Soap prevailing after the teams had been all-square at the end of normal time. I have to say that I much prefer writing about things like that than the sport’s politics.