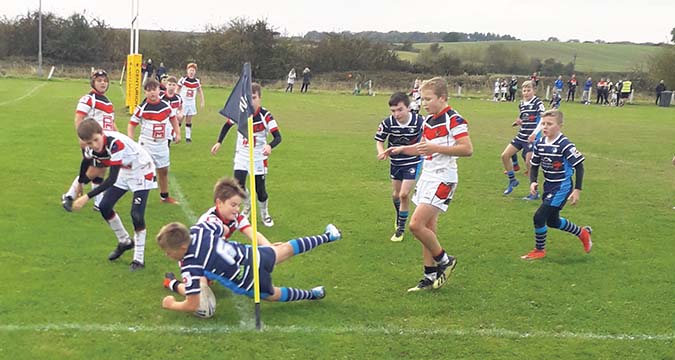 The announcement this week by the Prime Minister, Boris Johnson, may offer a clue as to when amateur Rugby League players can aim to return to action.

It’s not far off a year now since the first Covid-19 lockdown was invoked and grassroots players, not to mention referees, coaches and those who run clubs, are understandably growing increasingly weary.

For that reason as much as any perhaps, one or two leagues are putting tentative plans in place, if only to give everyone something to look forward to.

I’ve heard on the grapevine, for example, that National Conference League bosses are considering running localised competitions during the summer. My understanding is that regionalised leagues of seven teams may take place, largely to avoid travel, which is definitely, in all the circumstances, the right approach.

Let’s hope that the competitions come to pass. They should be successful events, for sure – there’s nothing, after all, quite like derbies to get the pulses racing, although a factor which would have to be considered is that matches involving local bragging rights invariably attract large crowds. Whether Boris Johnson and his medical advisors would, by mid-summer, be happy at the thought of spectators attending amateur Rugby League games in big numbers (it’s not uncommon for there to be no space at all to be found at the pitch-side barriers) is another matter of course.

We’ll find out, at the end of the pandemic, what impact it’s had on amateur Rugby League.

My hope is that it will have made players – too many of whom adopt what amounts to a ‘take it or leave it’ attitude to Rugby League these days – far hungrier for the game. Time will tell on that one.

Time will tell, also, on whether coaches and club administrators will have the same appetites as before. I expect coaches will – but secretaries and others may be a different matter.

The long lockdown has given many time to reflect on whether they actually miss the game, especially as (as I reflected in last week’s issue) more and more work is being directed their way by the Rugby Football League (in my opinion rightly so – in each and every instance it’s entirely for the right reasons).

Even allowing that the RFL is correct to insist that proper systems are in place at grass roots clubs, the reality remains that more is being asked of volunteers, which is an area of concern that, for me, is becoming as important as the commitment (or lack of it) of players.

There was a telling thread on a forum on TotalRL.com last week involving, admittedly, only two or three stalwarts (one of whom I think I know – a bloke who has done a massive amount for his club and the local scene for many years).

One lamented: “The amateur game has moved beyond a hobby or pastime. Too much stress is being put on the clubs, no wonder the game is shrinking at a rapid pace. The workload is far too great for one, two, or even three people who are prepared to do the hard yards.

“It’s looking like I could be stepping away. My work can take me from Aberdeen to Dover during the week, I then have to work out quotes for new work, order equipment and actually do some work on site. The work being created by others, sat in a comfy office, for a club to get a team on the park is at breaking point.”

One response was: “100 per cent correct, I along with others have had enough. The hard work and aggravation now far outweighs the enjoyment. The RFL need to realise that we are volunteers and are not employees. If anything, lockdown has shown people that life can easily go on without time spent on thankless tasks. We should all be wary of what lies ahead for the community game should we struggle for volunteers.”

While I don’t agree that the RFL doesn’t appreciate that grass roots activists are volunteers – it would be a dereliction of duty in the current age if the Rugby Football League didn’t impose the regulations that it does – I can absolutely see the point.

As I ventured seven days ago, it’s reaching the stage where all sports are placing their futures in danger by (rightly) insisting on making activities as safe as possible on and off the field of play. I can see the point coming, and fairly soon, when folk will no longer step forward at club level to follow through those stipulations. And in that event Rugby League, rugby union, soccer, cricket, hockey, you name it, could all die in this country, because the professional versions of each sport rely on the production line supplied by amateur clubs.

Rugby League’s hopes of survival may well rest on a return to the practice of yesteryear, in which the sport at junior and youth level was almost solely restricted to schools. That could, I think, be the solution for professional clubs. But unless, as I suggested last week, some ‘middle ground’ is found between the politically correct approach of the modern day, and the very casual approach of yesteryear, Open Age team sports will be in danger of withering on the vine. This is now becoming my biggest concern – of many – for the future of Rugby League.

Meanwhile, I was saddened to learn last week of the death of the fine referee Billy Thompson. He officiated in many top games, of course – and, I’m glad to say, in at least one that was at the very opposite end of the spectrum.

I’ve no idea how this came about, but the great man actually turned up to referee one of our matches when I played for the Middleton Arms, in south Leeds, in the 1970s. It was a very run-of-the-mill lower division Yorkshire League game, and I can’t even recall who our opponents were, but it certainly wasn’t one of those ‘derby’ clashes that often require a very firm hand from the man in the middle, and I don’t think it was a fixture in which the result mattered too much.

It was just a low-key, mid-winter affair, but Billy refereed us with dignity and respect, just as if we were professionals really. I’ve never been so happy to have a knock-on ruled against me, I have to say.

Billy Thompson sat with us for a few pints afterwards (you could in those days) before setting off home to Huddersfield (some distance away, which was another thing), and he was great company. He will be badly missed, and certainly not only by those at the pinnacle of our sport.