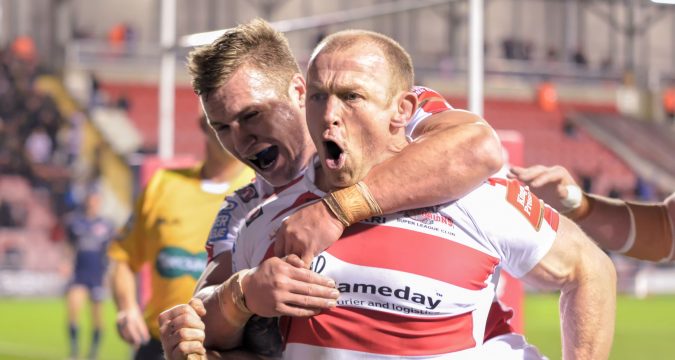 Highlight: Take your pick so far; although Tigers fans will not forget the 66-10 mauling of local rivals Leeds back in March in a hurry, surely.
Lowlight: There haven’t been many, but the disappointing defeat to Salford in the driving rain earlier in the season is perhaps the most frustrating.
Star player: There are plenty of contenders to pick from – but Castleford look a far more fearsome prospect in both attack and defence with Zak Hardaker in the side.
Grade: A

Highlight: Perhaps the pick of Leeds’ wins this year has been the 52-24 triumph at Hull in April – which hinted at a happy season for the Rhinos even back then.
Lowlight: The manner in which they were hammered by local rivals Castleford at the Mend-A-Hose Jungle was a real anomaly in Leeds’ season.
Star player: Matt Parcell has settled into Super League well and Mitch Garbutt is in great form: but Joel Moon has been a revelation in the halves.
Grade: B

Highlight: Their victory over league leaders Castleford at the KCOM Stadium was a firm indicator that Hull are in the thick of the title mix this season.
Lowlight: The awful hammering they took at Magic Weekend when they were thumped 45-0 by St Helens.
Star player: Hull look a much better side when Albert Kelly is in the side – that is without question.
Grade: B-

Highlight: The early-season consistency which saw the Red Devils get right in the thick of the title race.
Lowlight: Some disappointing defeats towards the end of the regular season: including the 25-0 reverse to Leigh last week.
Star player: Ben Murdoch-Masila has been a revelation for the Red Devils this season.
Grade: B

Highlight: The win at Wigan in May definitely made people stand up and take notice of Trinity’s credentials this year.
Lowlight: Given recent history it’s definitely not too much of a lowlight, but the failure to secure a top-four spot on the final day will sting Trinity.
Star player: Matty Ashurst and Tinirau Arona continue to impress, David Fifita remains the cult hero but Kyle Wood has been Trinity’s standout.
Grade: B+

Highlight: Justin Holbrook’s first official and unofficial games in charge – the 45-0 win at Magic over Hull followed by a 22-19 win against Wigan – take some beating.
Lowlight: The early part of the year as a whole could perhaps be suggested: but the disappointing 16-14 loss to Widnes sticks out.
Star player: England centre Mark Percival has impressed on plenty of occasions this year: as has prop Alex Walmsley.
Grade: C-

Highlight: The Warriors’ World Club Challenge win against Cronulla way back in February was without doubt the standout result for Wigan so far.
Lowlight: The run of form which equalled that winless run from way back in 1903 to leave Wigan well adrift of the top four.
Star player: The form of Morgan Escare in the early weeks of the year was sensational – and his injury coincided with Wigan’s drop-off in form.
Grade: D

Highlight: The emotionally-fuelled victory over Leeds following the death of Jennifer Davy was a night with so much attached to it for all at Huddersfield.
Lowlight: Not so much in the league: but the defeat to Swinton summed up Huddersfield’s early-season fortunes.
Star player: Hooker Kruise Leeming has truly excelled as Rick Stone’s starting hooker this season.
Grade: C

Highlight: Their incredible victory over Brisbane in the World Club Series – which proved to be a false dawn in regards to a bright season.
Lowlight: The shocking run of form at the start of the year which put paid to any chances of making the top eight.
Star player: Ryan Atkins has been Warrington’s standout player in a real season of struggle.
Grade: E Highlight: Their victory at Hull at the start of the year was a real standout moment. Things, sadly, did not stay as good.
Lowlight: The loss to Huddersfield which resulted in Laurent Frayssinous’ departure from the Dragons.
Star player: When he’s been fit, Greg Bird has proven himself to be Catalans’ most valuable asset without question.
Grade: D-

Highlight: What else? It has to be that incredible Thursday night victory against Wigan which will live long in the memory for Leythers everywhere.
Lowlight: Their disappointing heavy defeat at the hands of fellow Qualifiers side Warrington.
Star player: At the start of the year, Gareth Hock’s form was so good, it led to his coach calling for an England recall.
Grade: D-

Highlight: The home victories against Leeds and St Helens certainly showed the Vikings were capable of better than what they have shown this year.
Lowlight: Too many defeats to name.
Star player: In a season of disappointment, youngsters like Matt Whitley and Jordan Johnstone have caught the eye.
Grade: E-