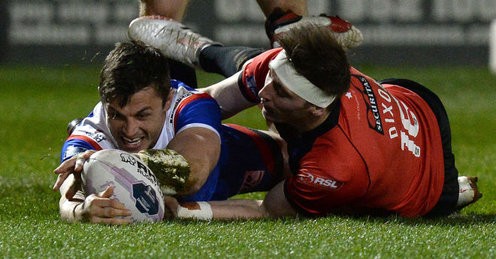 Two teams in contrasting form meet at Langtree Park on Friday night, as the unbeaten, table-topping St Helens take on Catalan Dragons, who are yet to pick up a point in Super League XIX.

Things could not be going much better for Nathan Brown’s men, as four wins from four have seen them shoot to the top of the early standings in the Super League table. Their squad – unlike the Dragons’ – is incredibly settled, with the likes of Luke Walsh, Lance Hohaia and Jonny Lomax already striking up a great understanding at the core of the Saints side.

Anthony Walker has been called into the Saints 19-man squad, but centre Mark Percival is out with injury. It promises to be a special evening for two St Helens mainstays, as Paul Wellens and Jon Wilkin make their 500th and 350th career appearances respectively.

Whilst things are picture perfect at St Helens, the situation could not be much different in the Dragons camp. They have suffered the humiliation of four defeats from their opening four games, and were hauled back to France this week for a crisis meeting. Since then, Jamal Fakir has halted his career, after refusing to play for the Dragons’ reserve side. Brent Webb has also been dropped by the Dragons.

Expect Catalan’s disastrous season to continue at St Helens. It is almost impossible to see a French victory, given form and the Dragons’ injury/suspension situation.