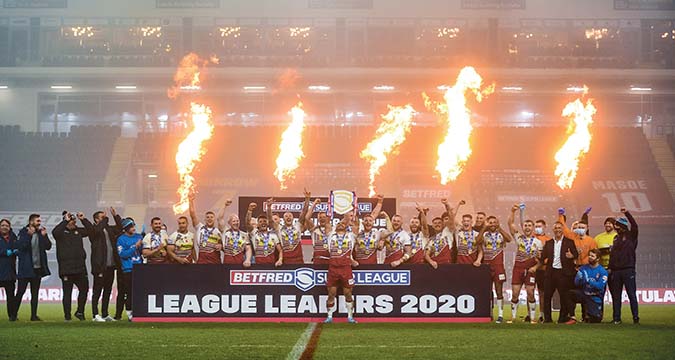 THE Super League table will once again be determined using points percentage this season.

The RFL have taken the decision to allow for the possibility of matches being postponed due to Covid issues.

Championship and League 1 clubs had already agreed to use points percentage.

As with the other two divisions, Super League clubs will be required to have played a minimum of 70 per cent of their scheduled fixtures (18 out of 25 matches) to qualify for the top-six play-offs in September – unless they have accrued enough league points despite having played fewer than 18 matches.

The regulations surrounding postponements have been broadly carried forward from the 2020 season.

Clubs will be permitted to withdraw from a fixture if they have seven or more of their top 25 players unavailable either because of a positive Covid test or following test and trace analysis, or if they are prevented from playing or travelling to play as a result of government restrictions.

The fixture will only be rearranged if both clubs have the same available match slot.

Win points percentage will be calculated via the following formula: the number of league points of a club divided by the number of matches played by that club, multiplied by 50.

If four or more clubs have not played the minimum match requirement (70 per cent of scheduled fixtures), the RFL Board will have discretion to determine an alternative minimum figure.

The RFL Board have also approved changes to the permitted movement between clubs during the 2021 season, again in response to Covid-.

Dual registration will not be permitted, but the minimum length of a loan period between clubs has been halved from four weeks to two – with strict criteria regarding testing procedures.

Players will be permitted to move between teams at the same club (eg, Academy to first team) and from professional to international environments.

The only permitted movement between the community game and professional clubs will be new signings and Scholarship players.

Meanwhile, the deadline for clubs to advise players in the last year of their contracts of their intention with regard to contract offers will be put back from April 30 to May 31, to reflect the later start of the season.

Players will still be able to speak to other clubs from May 1, as previously.