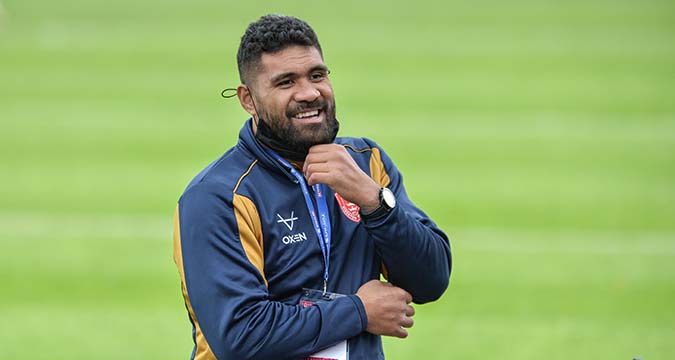 A weekend of Rugby League across the UK and Australia dedicated to supporting stricken Hull KR star Mose Masoe has raised more than £100,000 for the foundation set up to help him cope with his career-ending spinal injury.

The 31-year-old former Samoa international, who also played for St Helens as well as NRL teams Penrith and Sydney Roosters, has been diagnosed as tetraplegic, meaning he has partial or total loss of use of all four limbs and torso.

Fans in the UK were urged to buy ‘virtual tickets’ for Super League’s Mose Masoe round, whilst a ‘We Stand With Mose’ campaign was launched across the NRL by the Men of League Foundation.

All proceeds are to go to the recently-established Mose Masoe Foundation, which will firstly support the father of three, who proved a popular pundit for Sky Sports for the two games on Thursday, and then go on to help others who suffer life-changing spinal injuries playing rugby.

Strong support was seen from the game’s leading bodies on both sides of the world, and from clubs, players and supporters.

Over the weekend, all Super League clubs supported the cause and a number carried his name on their number ten shirts, which were then put up for auction.

Other teams ‘paid to play’ and some stars auctioned their shirts and boots to further boost funds.

Clubs and players shared videos on social media urging fans to back the campaign and sending messages to Masoe and his family.

It is support that Masoe and his partner Carissa said had been “overwhelming and humbling”, adding that they were “truly thankful to each and every person” who has supported them.

“What has happened over this past couple of weeks, with the forming of the foundation and now over these past few days, has been truly overwhelming,” said Masoe.

“It is really humbling to see so many people, from former playing colleagues and opponents to fans of all clubs showing their love to our family.

“We are truly thankful to each and every person who has supported us. It is something we’ll never forget.”

Mike Smith, the vice-president of the RFL, has been heavily involved in the development of the Mose Masoe Foundation as a former Hull KR chief executive, and says the support shown has surpassed expectations.

He revealed the target had been to raise around £90,000, which would have been equivalent to a ‘virtual sell out’ of 18,000 £5 virtual ticket sales at the Totally Wicked Stadium in St Helens, where the latest Super League fixtures were played.

He said: “The support across the sport has been absolutely incredible. We set ourselves a big target and to have beaten that is tremendous. We have been amazed by the media coverage of this campaign and it has really said a great deal about our sport.

“It shows the love for Mose as a person, but also the strength and togetherness of Rugby League.

“Our work continues now as we still need to raise a significant amount more, firstly for Mose, as it is likely he will need lifelong support, and then of course others in the future too.

“What we have done over the past few days is lay the platform to achieve something really special.

“For that reason the texting donation system will remain running alongside the Go Fund Me page, and we have exciting plans which again can involve all across Rugby League in the UK and Australia, which we will be announcing soon.”