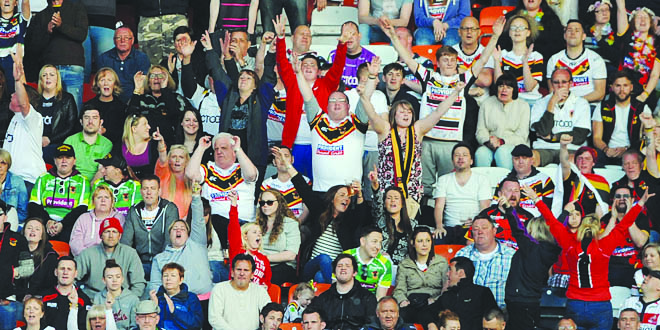 Supporters Direct have exclusively told TotalRL.com that they are “ready to help” Bradford Bulls fans should they want to launch a bid for ownership or part-ownership of the club following its entry into administration earlier this week.

Bradford chairman Marc Green announced on Monday that he was placing the club into administration following a dispute with HMRC – and the situation got worse on Wednesday when the RFL announced they had terminated Bradford’s membership: although TotalRL understands this to be standard procedure when a club goes into administration.

Supporters Direct have helped fans in a number of sports be involved with ownership of their club, with the most high-profile examples clubs like Portsmouth FC, AFC Wimbledon and, in rugby league, Hunslet Hawks.

And James Mathie of Supporters Direct say they have already had supporters get in touch from Bradford about trying to get something off the ground – and they are open to helping wherever they can.

“I’ve got to stress things are right at the start at the minute,” he told TotalRL.

“Where we are at the minute is that Supporters Direct are ready to help if there is sufficient interest and momentum from the fans. We’ve had a few supporters get in touch and people are wondering how we can help. I’ve had missed calls and I need to get back to the fans who have reached out and contacted us.

“Is there enough momentum or interest in supporters having more of a say? I can’t speak for them but I would hope that there is. It doesn’t solve all the issues of course, but there’s a whole exercise here with which we have the technical expertise to help.

“Is it something the supporters and community are interested in? Can it work given the current position given the club finds itself in? There’s a limit to what can be raised and who has the controlling interests at the moment.”

Mathie did add that he was hopeful that, with the supporter base Bradford possess, it could yet be possible for Bulls fans to be involved in the future make-up of any new board if the club are saved.

He said: “The fact that there’s a sports club that has got a fanbase and is an important part of its community, and there’s going to be a change of ownership with it being administration, our role is that we would love to look at the potential of supporters having ownership or a greater say in what the future make-up of the club would like.”

Supporters Direct will now gauge whether there is sufficient interest before a likely meeting with a group of supporters.