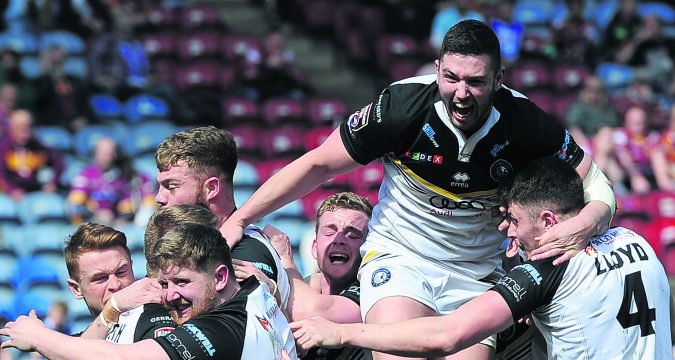 Mazey, who has experience as the head of electrical services specialists company S R Waite Group, is the nephew of former Lions great Billy Davies.

His arrival follows the club’s latest update on their financial position, with a statement saying the club is “emerging from the storm clouds”.

Debts thought to be around £100,000 left the club in danger, however the club has managed to steer clear of extinction thanks to fundraising, internal efforts and a £60,000 loan from Salford City Council.

The club also confirmed that with their financial predicament looking more secure, they are planning to re-open talks with Salford City Council with regards to the Agecroft Stadium project, the prospective new home of the club moving forward.

“It is an absolute honour to become Chairman of a club with such a rich heritage as Swinton Lions,” Mazey said.

“Since the extent of the club’s financial problems came to light, there have been some outstanding efforts from Swinton supporters. That level of passion and commitment to the club is ultimately what persuaded me that Swinton Lions is a club worth investing in, and one that can have a bright future.

“The game of Rugby League is my passion and I have been fortunate to have some great times in both the professional and community games over a number of years. However, the challenge of taking Swinton Lions forward and leading this new management team, together with our loyal volunteers and fantastic supporters, is one that has really whet my appetite.”

The club’s new management structure moving into 2018 will involve Steve Wild, who has had a large involvement in guiding the club through their financial difficulties, and Alan Marshall, who will lead financial matters. The club’s current president David Jones will also remain in his role while Trust chairman Steve Moyse will also be involved.