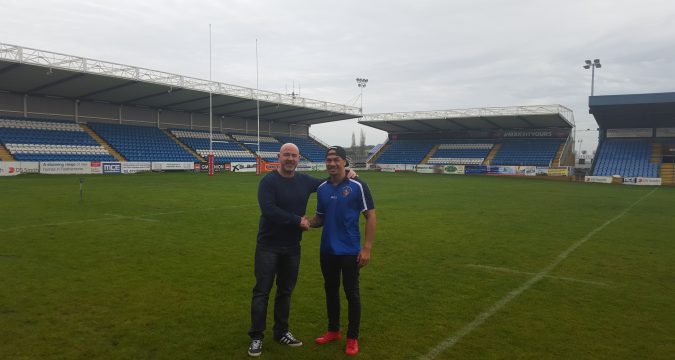 Featherstone Rovers recruit Misi Taulapapa hopes the squad can bring back the “fear” that opponents have playing against the club.

The 33 year-old joins from Sheffield Eagles ahead of the 2016 campaign and believes the squad are united in their aims to return the club to their former ways.

He was part of the Eagles side who finished 7th place in the Super 8s Qualifiers, while Featherstone missed out on the top four of the Kingstone Press Championship, but were victorious in the Championship Shield.

Samoan international Taulapapa hopes his new club can become one of the most feared sides in the competition next season and referenced their history as a reason to do so.

“If you ask most people what they think about playing Featherstone they hate it and we’re trying to bring that fear back into the club again.

“I’ll be playing in the centres and I’ll give it my all, obviously we’ll try and win every game we can and the key is definitely consistency.”

While Taulapapa joins the club with five years experience in the competition and knows all too well how to succeed in the division as he was part of back-to-back Grand Final wins with Sheffield in 2012 and 2013.

Featherstone have added ten new recruits to their side, including Taulapapa, with a further 25 players who featured last season no longer with the club.

After wholesale changes at Featherstone, the 33 year-old believes with an improvement of the defensive side of their game and also on team character, the club can compete against in the top four.

“The main goal for us is definitely to make the top four and the team looks really good, they’ve recruited really well over the pre-season and things are starting to shape up,” he added.

“There’s a lot of young lads in the side but there’s also a lot of old heads who will look to lead the side and I just hope I can do my bit for the team.

“There’s a lot of new players, so for the last 6/7 weeks we’ve been trying to gel as a team and we’re slowly building that team character you need in this division.”

Taulapapa’s former side Sheffield have strengthened in the outside-back positions for 2016, with Ben Blackmore moving in the opposite direction adding to the try-scoring ability of Menzie Yere and Rob Worrincy.

The former New Zealand Warriors and Cronulla Sharks centre believes it was time for a fresh start with Featherstone and believes the move from Sheffield came at the right time.

“It’s always good to get a fresh start and I needed a bit of a change and it’s been a breath of fresh air since I’ve come to the club.

“I just thought for me it was time to go and obviously they’ve got some really good players at Sheffield in the outside backs and I can’t wait to get started next season.”