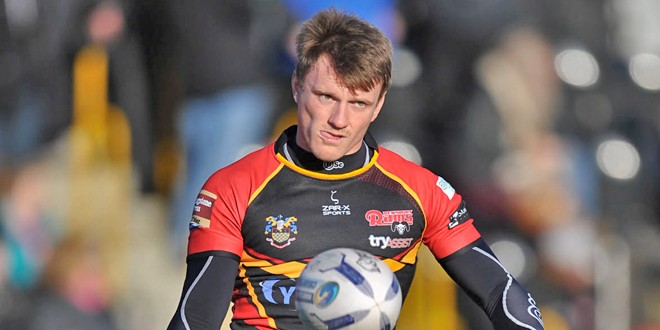 Dewsbury Rams scrum-half Anthony Thackeray and Gloucestershire All Golds hooker Casey Canterbury have been named as the Kingstone Press Players of the Week.

Thackeray claimed the Championship award after scoring five tries in the Rams’ 42-30 win over Barrow Raiders, while Canterbury controlled play from two different positions to fend off fierce challenges for the Championship One award from Oxford’s Matty Hadden and South Wales Scorpions hooker Connor Farrer.

Every week each coach in both Kingstone Press Championship competitions is contacted to help produce the awards.

Kingstone Press Player of the Week – Anthony Thackeray (Dewsbury Rams)
Anthony Thackeray produced a five-star performance as Dewsbury Rams came from behind to win 42-30 at Barrow Raiders.
The scrum-half scored five tries and had a hand in his side’s two others in an influential performance.
It is the second time this season that Thackeray has earned the award, having been named Kingstone Press Player of the Week following the opening weekend win over Featherstone Rovers.
Rams coach Glenn Morrison said: “It was the best display I have seen from anyone all year.
“He dominated the whole game, and as well as scoring five tries himself he set up two others.”

Kingstone Press Championship One Player of the Week – Casey Canterbury (Gloucestershire All Golds)
Casey Canterbury marked his Gloucestershire All Golds debut in fine style, dictating play from two different positions in a 34-24 win against London Skolars.
Canterbury, who trained for the first time with his new team-mates just two days before Sunday’s game, was introduced off the bench after just 15 minutes and went on to dominate proceedings.
All Golds coach Steve McCormack said: “Casey was fantastic. He played at hooker until half time, then switched to scrum-half when we lost Danny Fallon to injury.
“He got out of dummy half well, picked up the tempo, added quality when we needed it and chipped in with two tries as well.”

Kingstone Press Try of the Week – Adam Higson (Leigh Centurions)
Leigh Centurions coach Paul Rowley hailed Adam Higson’s spectacular finish in Sunday’s 50-20 win over Doncaster.
Rowley said: “If it had have been in the NRL or Super League, it would have been trending on YouTube by now. It was a world-class try.
“He had to check his run, so he didn’t catch it in full flight, and that gave the covering defenders an opportunity. He looked certain to be bundled into touch, but came up with perfect diving finish.
“Adam’s been absolutely outstanding all season and this was just the latest example. He’s a big fella and a quality winger in all aspects.”

Kingstone Press Performance of the Week – Gloucestershire All Golds
New coach Steve McCormack praised Gloucestershire All Golds’ attitude after watching his team secure a 34-24 victory over London Skolars
The All Golds had not won a league game for seven weeks, but Scotland coach McCormack was left celebrating his return to the club game.
He said: “We scored seven tries to their four, and battled against injuries that meant we only had one interchange left in the last 20 minutes. It was a top win.
“There’s still a long way to go and lots for us to work on, but this was a good start. We want to change the way other teams think about the club – we don’t want anyone thinking they’ll get three easy points when they play us.”