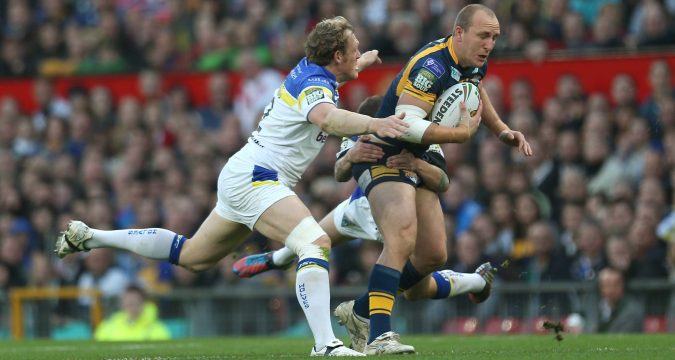 He may have won seven Super League Grand Finals in his time with Leeds Rhinos, but how did that prepare Carl Ablett for life outside the sport?

Carl Ablett didn’t think that he’d played his last game for Leeds Rhinos when he put pen to paper on a new two-year extension in the late autumn of 2018. The versatile back-rower – one of the arguably more unsung cornerstones of the club’s Golden Era – had pulled up with an ankle problem in early September during his side’s Qualifiers defeat to Hull Kingston Rovers, but he felt in sturdy enough shape to sign fresh terms through the end of 2020.

Yet over a year on, the 34-year-old is adapting to a career off the rugby field, in charge of his own plumbing and heating firm as he continues to plot his life after league. It’s been something of a rollercoaster period for the former Hunslet Parkside junior, particularly as he didn’t envision hanging up his boots until the closing stages of a campaign where he’d made no appearances.

“It was late in the season last year,” he recalls when discussing the decision to pack in his professional sporting career. “I’d had an ankle injury, an operation, another injury, another operation, a blood clot, two nights in A&E fearing I’d be on thinners for the rest of my life. It was an ordeal.”

Ablett was cleared to ultimately return to action by a specialist during his recovery period last season, but he admits that it felt like the right moment to step back, following conversations with Kevin Sinfield and the club over his future. Call made, he turned his attention towards his new path – one he’d been inspired to take up some years prior.

“I’d always fancied doing something manual,” he notes. “When I was playing, I had a couple of mates who were plumbers and gas engineers. I spoke to them, studied the trade. It just felt right.” Did either of his parents work in similar businesses? “No, nobody worked in it – it’s just me, really.”

The choice to challenge himself is hardly a surprise for Ablett who, save a brief spell with London Broncos on loan during his teenage years, spent the entirety of his career on the books with Leeds. A seven-time Grand Final winner – he holds the distinct record of most victories in the showpiece event without loss – and a former England international and Dream Team recipient, he has always thrived on testing his skills across the board, having filled multiple positions on the field throughout his career.

He revealed that the club lent their assistance every step of the way in helping him chart a path in his new profession, adding: “They helped me find some courses and the qualifications.”

Does such assistance, from welfare officers through to the Rugby Football League’s big push to help retiring stars settle after the curtain call, make a significant difference? He believes so.

“They have things in place to try and get every playing thinking about it. The more you can do, the better.”

He has a dry chuckle to himself. “It’s very different, isn’t it? Having a normal life as opposed to that of a professional sportsperson. It’s a distinct environment. The latter is very inclusive – you get used to the same thing day in and day out and getting into that routine. It’s a bit of an eye-opener to join the real world, as it is.”

Ablett was never under any illusions on just what the transition from high-intensity training sessions to exertion of a different kind would be like, acknowledging that he felt he had prepared his mind for the culture shock of swapping careers. “It’s been difficult in some ways, but maybe not mentally,” he acknowledges.

“I’d always prepared myself. I don’t miss or crave the mental side of it.”

He admits that the lengthy spell on the sidelines that led him into the decision meant that he made the swap earlier than he was necessarily anticipating and that there has been a resultant change to his preferred plans as a result.

“It’s probably more of a shock to me because it happened twelve months earlier than I’d planned,” he adds. “I’d always had an idea in place, and I had an extra year that was cut short. Everything got accelerated a little bit. Ideally, I’d have gone into business with someone else but I wanted to set up on my own, build those contacts. It has been difficult so far, but hopefully I’ll reap the rewards of that.”

Having swapped out tackle bags and heavy hits for pipe leaks and faulty faucets, just how is he finding his new career after several months? Ablett enjoys the practical aspect of it – that aforementioned desire to put his manual passions to use – but he notes that business itself is something of a slave to the seasons and the environments around it, particularly as he has tried to get things off the ground.

“It has its ups and downs,” he acknowledges. “At times, it can be really busy or it can pretty much die off. With all the stuff that’s happened recently – Brexit, Christmas – it fluctuates. I finished in October so I had to set up the business, get the accounts and branding in order, all that stuff first and foremost. For rugby players, you’re not used to living in a real-world with these things so it’s taken a few months to get it going. It has been difficult to get the work in but I definitely feel like I’m getting there now.”

Despite his own business prospects though, Ablett hasn’t ruled out an eventual return to his old stomping ground down the line, to follow in the footsteps of several former teammates. “When I sat down with Kev, he always said there could be opportunities. You never say never, and at some point, I’d like to go back, to help whoever I can” He pauses and mulls it over. “Either way though, I wanted to try something new, to throw myself into a different world and to be a success at something else.