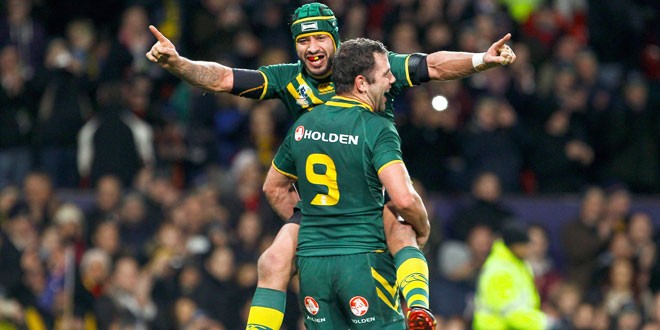 Johnathan Thurston has become only the third man to win Rugby League World’s coveted Gold Boot on two occasions.
The Australia and North Queensland Cowboys stand-off edged out England forward Sam Burgess to follow up his success in 2011.
Thurston caught the attention of the 13-man voting panel with his man-of-the-match performance in the World Cup final win over New Zealand, completing an outstanding series for the 30-year-old.
Thurston also took his club side the Cowboys to the NRL play-offs and helped continued Queensland’s stunning run of eight successive State of Origin series wins in 2013.
“We asked the panel to consider performances in international matches first and foremost, and given his outstanding World Cup campaign, Jonathan Thurston has emerged as a deserving winner,” Rugby League World editor Gareth Walker says.
“It was typical of him the way he orchestrated his Australian side superbly in the match that mattered most, though it should be noted that he was excellent for the entire competition.
“Ever since breaking onto the international scene almost eight years ago, Thurston has been at the very forefront of the sport at its highest level. During that time he has also collected a host of individually honours domestically, and is at the very centre of Queensland’s stunning run of wins.
“When Rugby League World contacted Thurston to tell him of his award, he spoke about being privileged to play alongside a host of players who will be remembered as greats of our sport.
“It is clear that after joining Andrew Johns and Darren Lockyer in an exclusive club of people to win the Golden Boot twice, Jonathan Thurston will also be among those.”
Thurston is one of nine Australian players in the World XIII selected by Rugby League World, alongside two Englishman and two New Zealanders.
However no player from Super League made the team, with England’s Burgess and James Graham both plying their trade in the NRL.

Each of the 13 judges were asked to vote for three players, giving their main contender five points, their second three points and their third one.

As with the Golden Boot, the 13 judges were asked to select a top three in each position, with their first choice earning five points, their second three, and their third one.