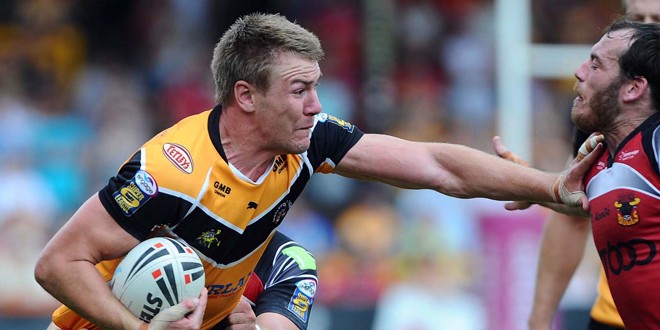 The Tigers gave a convincing performance to retain their unbeaten record, while the Robins have now failed to secure victory in their opening three games of the season.

Castleford Tigers kept their unbeaten record and moved into second place in the Super League table with a convining 10-30 victory at Hull Kingston Rovers.
The highlight of the game was a hat-trick of tries to recalled winger Richard Owen.
And yet it was Rovers who took an early lead, through James Green, who went under the posts from a pass by Kris Keating.
But the tide turned when Keating knocked on in his own in-goal, conceding a drop-out that saw the Tigers moving the ball quickly to the right for Owen to scorch in for his first try, goaled, with unique round-the-corner style, by Marc Sneyd, on a season-long loan from Salford Red Devils.
Owen got a second when he took a Liam Finn bomb aimed towards the corner, with Sneyd again converting and then it was Frankie Mariano’s turn to score a try from a Finn bomb.
Finn was then sinbinned and put on report for a tackle on Kris Welham when he appeared to pull on the Hull KR player’s arm.
As Rovers tried to get back into the game, Luke Dorn pulled off a trysaving tackle on Jonathan Walker, but the Tigers couldn’t hold out Omari Caro when he touched down in the corner just before half-time for a half-time scoreline of 10-18.
In the second half Mariano had a second try disallowed for obstruction, and Travis Burns gave hope to Hull KR with a superb 40-20 that ultimately came to nothing.
The gamebreaker came after 68 minutes, when Oliver Holmes touched down for the Tigers, and the margin of victory was confirmed at 20 points when Owen scored his hat-trick try near the end of the game.