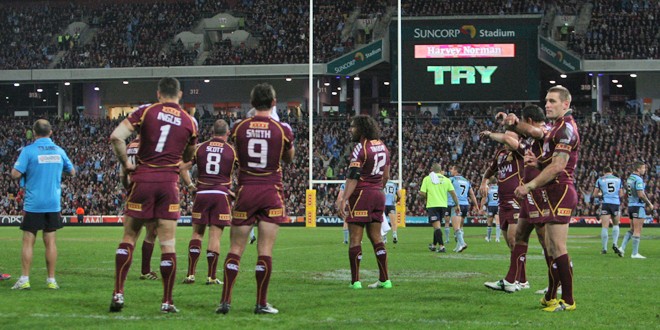 Is it just me, or is anyone else getting mightily sick of the amount of time we are devoting to video referee decisions in Super League?

Whether you’re watching the game live at the stadium or on TV, the video referee has become an incredible drag on the game. I was a great advocate of it when it was first introduced, but when virtually every decision goes to the video referee, as it seemed to do on Friday night when I watched Huddersfield take on Leeds, it tests the patience of everyone.

I realised just how much it irks me when I watched the NRL’s Auckland Nines tournament three weeks ago. At that tournament there was no video referee, and it was a liberating experience not to have one.
The whole event was improved by the video referee’s absence, and the games flowed much more naturally.

I’m not saying that the video referee doesn’t get most of its decisions correct. It’s just that I no longer think it’s worth it, and the occasional error from a referee in awarding a try would be a small price to pay for getting rid of it.

The new strategy of the video referee announcing the decision to the crowd didn’t necessarily work too well on Friday either. Most of the decisions involved disallowing Huddersfield tries, and it was hard to hear the explanations over the chorus of booing that came from the Giants’ fans.

And on the same theme, on Sunday morning I watched Sam Tomkins’ debut in the NRL, for the New Zealand Warriors at Parramatta, and in that game the video referee was called into action nine times. That is way too much and something needs to be done about it.