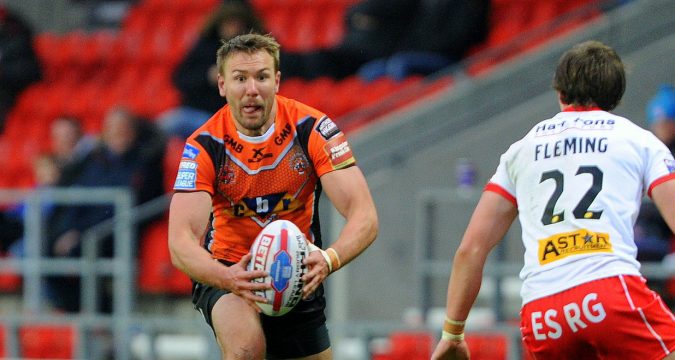 Castleford captain Michael Shenton admits it is time to prove what the Super League leaders are made of in a do-or-die game on Thursday night as they aim to reach their first ever Grand Final.

The Tigers know victory against St Helens on Thursday will ensure they reach Old Trafford for the first time next weekend, in front of what will likely be a sell-out crowd at the Mend-A-Hose Jungle.

And after being so dominant throughout the regular season and the Super 8s, Shenton told TotalRL that the time for talking is over: and it’s time for Castleford to prove they can handle the occasion of a knockout semi-final.

“Yeah this is where we find out all about us,” he said.

“It’s tough when you say it like that because we’ve achieved so much this year, but we’ve put ourselves in such a great spot and we don’t want to let anyone down. I trust this group of blokes totally in that regard though; we’re confident, and I can’t wait. I wouldn’t have dreamed of this a few years ago.”

However, the Tigers face one of only two teams to beat them at home this season in the Saints, and for Shenton – who played in a Grand Final with Justin Holbrook’s side earlier in his career – he is fully aware they are facing a dangerous side on Thursday.

He said: “I remember talking to Wilko (Jon Wilkin) in the first Super 8s game, and I said to him that we’d play each other again.

“They were out of it at the time but they were great against us – they out-enthused us, which nobody has done really. From that, we learned a lot of lessons and I hope that shows on Thursday, but I did say to some of the lads we’d play them again.

“But if you want to win Super League, you’ve got to beat the best – and beating St Helens would represent a massive achievement. We know it’ll be a big ask but we’re in a good place.

“But they know it’s a big ask to come to our place – and that’s what we’ve created this year, that feeling that the pressure is on them. We’ve been trying to learn how to play big-game football over the last few years and I think we’ve come a long way in that regard. I’m positive we’ve got everything it takes to get to a Grand Final.”

Shenton was speaking at the reveal of the Super League Dream Team, where he was named in the side for the third time in four years.

And as one of six Castleford players represented, he believes that the buzz around the club at the moment emphasises the journey the whole club is on.

“I think it’s been the best season for us but it’s the best Dream Team accolade for me personally, too,” he said.

“It’s a special week; we’ve found out about the Man of Steel nominations, then the Dream Team, then there’s the game. It’s a great honour for me to be involved but as captain, to have that many players recognised, it’s superb. It shows that we’re moving in the right direction with players that are going to be here for the foreseeable future.”