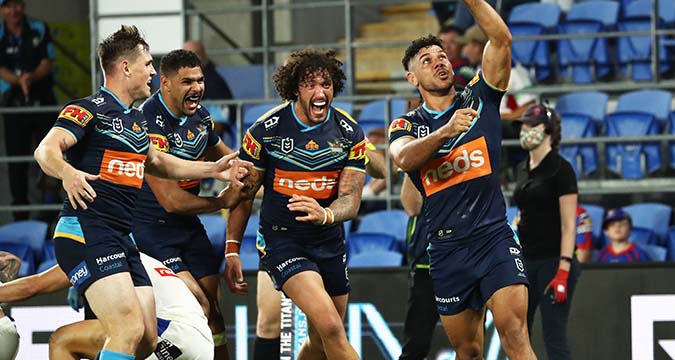 Gold Coast Titans made it five wins in a row with a 36-6 win over Newcastle Knights, ending their season on a major high.

The Titans may not be playing in the Finals, finishing the season in a credible ninth position, but they played some outstanding Rugby League against the Knights who will feature in the play-offs.

Despite Ash Taylor’s early try for Gold Coast, Newcastle dominated possession early but were denied two tries in the opening ten minutes. Mitchell Pearce’s effort was ruled out due to a knock on while Edrick Lee’s long legs touched the whitewash before he grounded the ball in the corner.

After weathering the storm, the Titans extended their lead to 12 when Mitch Rein spotted a gap and sliced through but Newcastle would reply through Lee who stayed in the field of play this time.

A remarkable individual effort from Brian Kelly, two minutes before the break, extended the Titans’ lead once again, though.

The tries kept coming for the home team in the second half. AJ Brimson scored two sensational efforts with Taylor’s second try sandwiched in between which was also a length-of-the-field effort.

Then a break and offload from Treymain Spry led to Kevin Proctor streaming down the left touchline for yet another try.