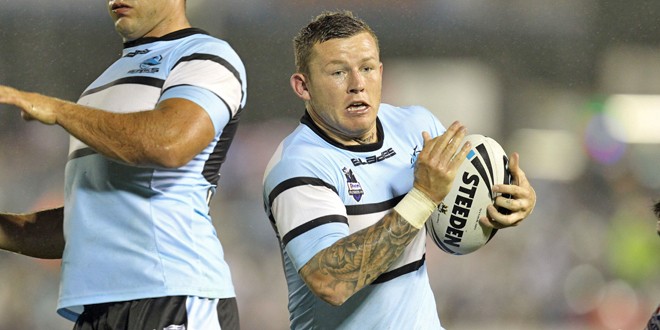 Here are some of the best quotes from the 28-year-old.

On his expectations
“I have a high expectation of myself so I have high expectations. For me, I just want to do well as a personal goal, but as a team goal, I want to go one further than the team did this year. I stopped playing league in the NRL in June and since then my focus has been on coming here with the Catalans. I followed their back end of the season closely and I like what I saw and I’m confident that if we all work together as a 17 and follow Laurent’s orders then we can be a force in the comp. I’m expecting it to be physical and I’m sure there will be a target on me at some points but I’m confident in my ability that I can do well.”

On why he chose the Dragons
“I spoke to a few people, but in particular Trent Robinson, and even though he is coaching the Sydney Roosters right now, for him to say that he would love to come back and coach here again someday was one of the reasons why I signed. He said that if I had the opportunity to go anywhere, I told him the clubs I was speaking to, and he informed me to come here and I took his word for it. I’m out of both the Australian and English media and with the tenth season coming up – that is appealing to me. They haven’t won a comp or a trophy since they started, so that’s going to drive me and I’m sure drive the whole playing group to achieve that in this tenth year.”

On his behavioural issues
“The Australian media has been pretty cruel, I’ll always put my hand up and I’ve obviously done the wrong things. I may not have deserved the punishment that I got but to be here in France and with the Catalans, I’m not looking back, that is all past me now. I’ve had four months to set a goal to myself, and to start a new adventure and I’ve never had that opportunity before, to set new goals, and now I’ve got that and the goals I’ve set myself are pretty high and I’m confident that the Catalans can help me achieve those goals. It’s like anything, you can’t look into the future, but I’m confident in myself and in the four months I’ve had away from the game, I’ve worked hard on myself personally, and I feel like I have come to a great club that will support me in my journey in Super League.” On his first training session
“I thought it went really well, I think the main thing going into a new team is communication and today was great. All the players as soon as we got here made us feel welcome and I thought the session ran pretty smoothly. It will take time to know some plays and players but after today, I’m quite confident that it went really well.”

On his new team-mates
“I know most of the players, as I said, I watched the finals series pretty closely, it’s going to take time but I’m living with Ben Pomeroy, a player I know from the Sharks, he’s helping me a lot. I’m living with Ben until Christmas, I’ll find my own place for after Christmas, I’m lucky enough to have my mum and sister come over a few times throughout the season but it’s always good to live on your own.”

On Gary Hetherington’s attempt to block his transfer
“I think everyone has an opinion and rightly so. For me, I have set myself goals and my goal is to perform here for the Catalans Dragons but also make the English Super league a lot stiffer and stronger competition and hopefully the way I play and the way I perform and the rest will hopefully by the end of this year, or by the time my career at the Catalans finishes, he will have changed his opinion. It’s like anything, you’re welcome to your own opinion and he expressed that and I’m happy with that and I’m confident that I’m going to do well here.”

At this point, Guasch stepped in and said: “Perhaps Gary Hetherington is a little bit scared, afraid and worried about us having Todd Carney in our team.”

On whether or not he spoke to former NSW team-mate Greg Bird – an ex Catalans player – for advice
“I didn’t catch Birdy, but my phone calls with Trent Robinson was enough for me to decide to come here to the Catalans. I spoke to Joel Monaghan also. Two nights before I left Australia, I had dinner with Joel and I know Michael Monaghan from my time at the Raiders, and that also excites me, for him to be a coach here, he’s done everything in the game, and I’m excited to work with him, to build my game as a half and to improve from what he knows.”