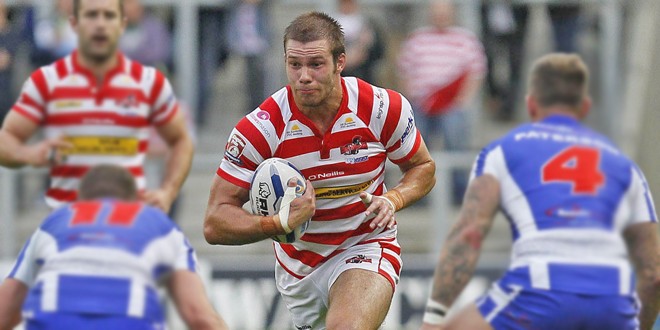 The 23-year-old joined Paul Rowley’s side on a 12-month deal in October after impressing during two dual-registration seasons while on the Warrior’s books.

Rowley said: “We are looking to bring down the average age of the squad and Tom is a player we wanted to secure. Although he was with us as a dual registration player from Wigan he bought into what we were about and was always regarded as one of us.

“He has been a consistent performer for Leigh Centurions for three years. We didn’t want to waste time in signing him so I am delighted to have him on board. His commitment and passion in playing for the Club is obvious when he pulls on a Leigh jersey and he is just the sort of player we want here.”

Centurions Head of Rugby Derek Beaumont added: “It is no secret that last year, when we started to assemble the squad we wanted Tom Spencer to be part of it. He played for us on dual registration last year and as far as we are concerned that has now gone and we are masters of our own destiny. We don’t know who our opponents might field as dual registration players but we know who we are putting out on the field.

“We initially signed Tom on a one year deal and in his time with us he has been fully behind what we are doing at the club. Tom Spencer is the obvious person to be the next one to secure his long term future with Leigh Centurions. I am delighted that he has extended his contract for another two years.”