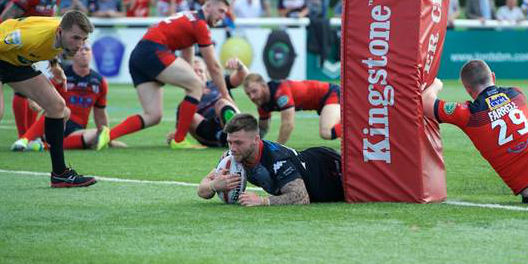 Toronto Wolfpack’s impressive recruitment drive for 2018 has continued with the signing of London hooker Andy Ackers.

The 23-year-old has become the club’s fifth signing ahead of their maiden Championship campaign after being granted an early release from his contract at London Broncos.

He will join a star-studded line-up of incomings at the Wolfpack, with Dave Taylor, Ashton Sims, Josh McCrone and Olsi Krasniqi already agreeing to join the club.

Ackers, who will turn 24 on Christmas Day, has been a key performer at the Broncos under Andrew Henderson, who signed him from Swinton Lions ahead of the 2016 season.

He made 48 appearances for the Broncos over two seasons, scoring 20 tries, and formed an outstanding partnership with fellow hooker James Cunningham.

However, he requested a release from his contract to be closer to his Wigan home, an opportunity he will get with Toronto, who are expected to be training at a Manchester-base next season when they’re located in the UK.

Paul Rowley has wasted little time putting together a competitive squad for their Championship campaign, with more signings expected to arrive through the doors before the start of the season.

The head coach has expressed a desire to add depth to his squad for next season after running with a smaller roster during their successful League 1 campaign.