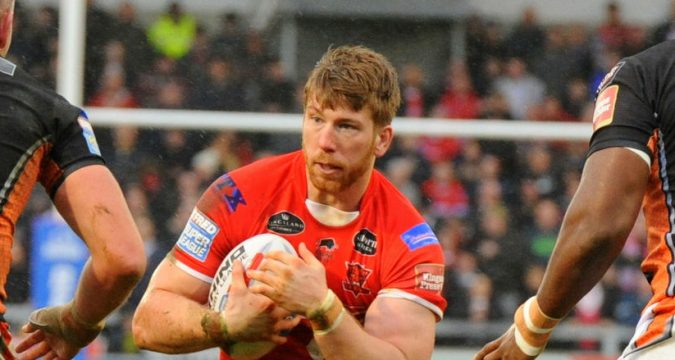 The forward, who, alongside brother Jordan, was officially released from former club Salford this week, has signed a deal until the end of the 2020 season with Rick Stone’s side.

“I’m absolutely buzzing to join the Giants. I can’t wait to get started and put in the hard graft in pre-season to hopefully have a massive 2018,” he said.

“Obviously there are a few reasons for joining the Giants. It’s a club with a lot of history, and the coach has been a big factor in me joining. I’ve heard a lot of good things about the club and the players here.

“There are current international players here, top quality lads, it’ll be awesome to play alongside them. From what I’ve seen watching last season, they’ve put in some great performances and I can’t wait to join them.

“I picked up an ankle injury last season, which halted my year. I was having a pretty good season up until then, so I’m looking forward to 2018 to pick up from where I left off. I just want to put in a good pre-season and then get off to a good start, that’s my main focus at the moment, I’m not looking too far ahead.

“2018 is building up to be a big season, so I would urge the fans to come down here as it’s exciting times for the Giants and £125 for a season ticket is amazing.”

Giants coach Stone admitted he was delighted to get his hands on Walne for the next three seasons. He said: “We’re really excited to have signed Adam Walne. Chris Thorman and I have spent a lot of time looking at his game and looking at what he can bring to the team.

“He had a good season in 2017, it was interrupted a bit because of injury but he came back and played the last couple of games.

“He’s a really tough, uncompromising forward who is going to add a lot to us. Obviously we’ve lost Sam Rapira but we think Adam is going to be a really good replacement and a great fit for us. He’s relatively young, he’s mobile and he’s a tough competitor that will add plenty to our team.

“It’s a great addition for us. We haven’t made a lot of changes to our squad this year but this is a really important signing, especially having another senior forward.”