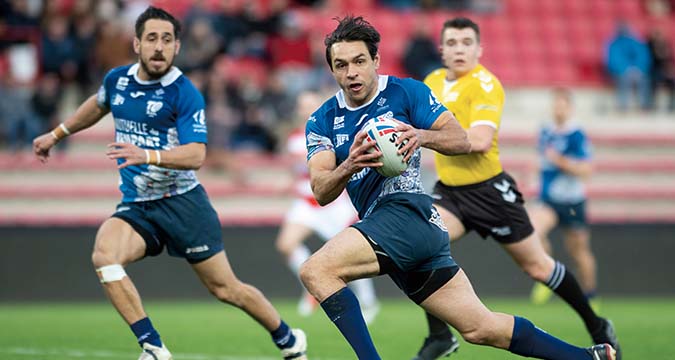 Toulouse Olympique have prepared for this year’s Championship like no other side in the competition, simply because they are operating under French Government guidelines instead of the British equivalent.

Toulouse have been training solidly for the Championship season for over nine weeks now, unlike the British sides, who were forced to halt their pre-seasons or start them late due to the surge of Covid-19 cases in this country.

That being said, Toulouse, surprisingly, haven’t been able to escape the cold winter weather we’re so used to in the north of England.

Vast swathes of southern France and Spain have taken a real battering in recent weeks, with a cold snap wreaking havoc in the unprepared region.

So as well as adapting their pre-season plan to take in the threat of the virus, Toulouse have also had to account for frozen pitches and heavy rain.

“There have been a few bits weather-wise where we have needed to adapt. We had some frosty mornings over here, so we needed to move our training, while there was a lot of rain so the pitch wasn’t in a good condition but we managed it.”

When they’ve not been fighting the elements, Toulouse have raised plenty of eyebrows with the calibre of signings pouring into the French city.

Super League stars Mitch Garbutt, Joseph Paulo, Dominique Peyroux and most recently Rémi Casty have all made the move to Toulouse, some travelling further than others.

These four players may be getting towards the end of their careers, but they bring huge experience and a massive weight of expectation.

“The squad is good,” Houles continued.

“We’ve brought in some big names and good players.

“I do believe the boys are stronger on paper. We need to look at it on the field and make sure everyone plays well together. That’s the only thing that matters now.

“I believe we have 24 players there with a lot of experience who have enjoyed success too. It’s making sure now that everyone understands what we want to achieve and how we want to play our game on and off the field.”

It hasn’t been all good news for the Frenchmen, however. Like many other sides in the Championship and League 1, Toulouse submitted an application to join Super League after Toronto’s hopes of making a return were dashed.

But with Covid-19 still a huge factor in Europe this year, the timing wasn’t right and Leigh’s application was accepted.

Houles believes his side has taken the news well, though, and are ready to do what they need to achieve on the field to secure a Super League berth for next year.

“The players were disappointed of course on missing out on a place in Super League,” he says.

“We really believed in it and we thought we were strong.

“As soon as they announced it, everyone moved on pretty quickly because at least we knew then what we had to do this year.

“If we are going to gain promotion, then we need to win it on the field which, to be fair, was the deal from the beginning way back when we started in League 1. It’s not changing anything.

“A lot of the boys will use it for creating motivation. It was good to see everyone wanting to play in Super League with Toulouse.”

Despite not being part of Super League this year, Toulouse go into this Championship campaign as one of the favourites on paper but, as their coach says, now they need to prove it on the field.