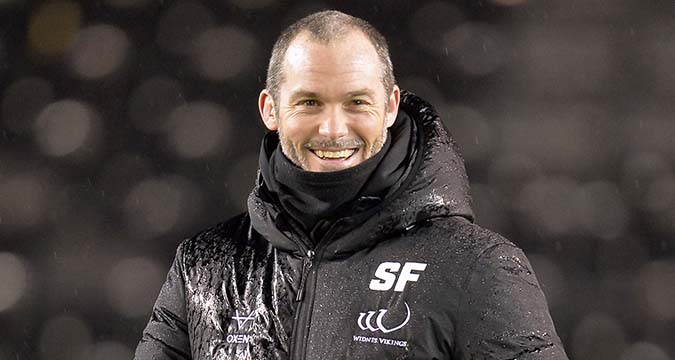 We’re now only a matter of weeks away from Championship sides playing their first game for a whole year, but the Vikings only restarted their pre-season training last week as clubs were finally allowed to conduct sessions inside and without social distancing.

Most clubs decided to return a few weeks earlier in stage one, but because the Vikings had already made it to stage two in their preparations and Covid-19 infections still high in the Widnes area, it was decided that their pre-season sessions would continue for the players at home.

So, if you compare the Vikings to Toulouse’s pre-season, they are a good few weeks behind in their preparations, which no doubt will be difficult to make up come game day in March.

But in their new coach Simon Finnigan, who is yet to coach a game for the Vikings after moving from Newcastle Thunder last year, they have a man who believes in his squad and his methods and won’t sit and complain about the lack of sessions ahead of the campaign.

“It was excellent to be back in and amongst it,” Finnigan tells League Express during the Vikings’ pause in pre-season.

“I understand why we can’t at the moment, but it’s still disappointing because you want to do what you love doing. But we’re not the only ones that aren’t doing that at the moment.

“As much as I’m disappointed, I’m not going to sit here and complain, because there is a bigger picture to it all.”

Since then, Finnigan’s players have begun their contact sessions once again as his new signings continue to bed themselves in. Paul Clough (Huddersfield Giants) and Matt Cook (Castleford Tigers) both join from Super League, giving the Vikings’ pack good experience and making up for the departure of MacGraff Leuluai and the Chapelhow twins, the latter having joined Newcastle Thunder.

Lee Jewitt also bolsters Widnes’ pack alongside Adam Lawton, while Steve Tyrer has joined his hometown club after a long stint with Halifax.

Finnigan is happy with his recruitment, but he admits that all Championship clubs have done good business and he hopes that will make the competition an attractive prospect for viewers yet again.

“I think we’re going to come back into a really strong and competitive league,” says Finnigan.

“I think Toulouse are probably the standout team, but I wouldn’t put them streets ahead of everyone else.

“Then there is a group with lots of clubs that are competitive. That’s the reason why everyone is desperate to get going. We can all see what’s ahead of us. We’re all excited about it. This is going to be a brilliant season once we get going.

“It’s a competition that will be really well watched. No one knows how it is going to end up or who is going to finish where. It’ll be ultra-competitive. I can’t think of a time when it was as close as it will be this season.”

Widnes aren’t alone in attracting talent down from Super League, but Finnigan knows that it works both ways and that teams in the top-flight are looking down into the second division more and more as the Championship quality continues to improve.

“A lot of Super League clubs are starting to look down to the Championship to try and find some gems,” he says.

“There are some really good players who are getting poached out of the Championship to go and play Super League, which has made the whole competition really strong.

“I look at every team across the board in the Championship and they’ve all got better than last year. There is no team that hasn’t recruited well. That can only add to the excitement and the sense of anticipation of how good the Championship will be.”